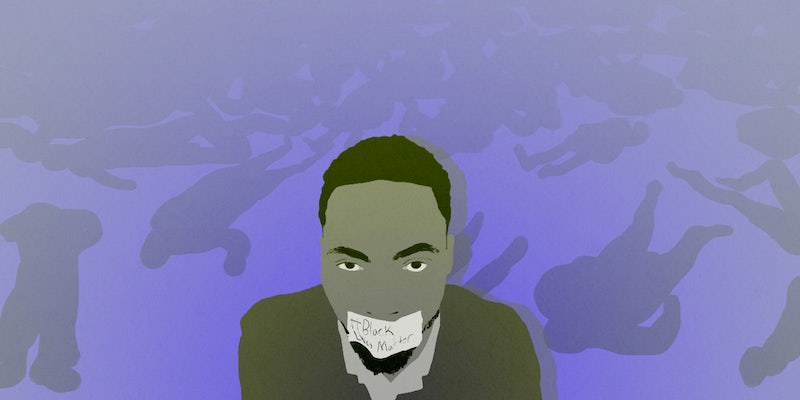 Where were the questions about #BlackLivesMatter during the GOP debate?

By all accounts, the second presidential debate was every bit as eventful as the first. The candidates came out red hot and ready to argue their points, and there was a ton of fodder for the internet to poke fun at. Just like the Aug. 6 debate, this one, held at the Reagan Presidential Library in Simi Valley, California, dove into many predictable topics—from Guantanamo Bay to foreign affairs and, predictably, Kim Davis.

But there was one hot-button issue that, yet again, didn’t get enough play: The GOP debate barely addressed the #BlackLivesMatter movement. And frankly, I’m not surprised.

As you might recall, the Black Lives Matter movement, and the growing national debate over police brutality, racial profiling, and public distrust of the law enforcement, was only briefly touched upon in the second hour of the first debate on Aug. 6, when moderator Megyn Kelly directed the question at Gov. Scott Walker (R-Wisc.). This time, though, the question never even came up.

During the first debate, Kelly asked Walker: “Many in the Black Lives Matter movement—and beyond—believe that overly aggressive police officers targeting young African-Americans are the civil rights issue of our time. Do you agree? And how do you plan to address it?”

It’s about training. It’s about making sure that law enforcement professionals, not only in the way into their positions, but through their time have the proper training particularly comes to use of force and that we stand up and protect those men and women doing their jobs. And for the very few that don’t—that there are consequences to show that we treat everyone the same here in America.

But the fact is, we don’t treat everyone the same here in America—and it’s not just the few and far between. Adding insult to injury, Walker’s response kinda-sorta skirted the whole race issue at the heart of the movement, despite the fact that Kelly specifically posed it as a civil rights matter.

And while much of the conversation surrounding the Black Lives Matter does have to do with police reform—making Walker’s comments on improving police training valid—it’s also about black lives and just how many are being taken each year as the result of excessive police force.

It’s about this alarming statistics, which gets swept under the rug way too often: Young black males are shot and killed by police at a rate that’s 21 times greater than their white peers. It’s about the sobering fact that the rate of fatal police shootings is on the rise, while the number of officer assaults has actually been declining for the last 25 years. It’s about Freddie Gray, Michael Brown, and Walter Scott.

Aside from Walker’s speedy, glossed-over response that night, the issue didn’t get any other play that night—a fact many were quick to note.

Just one #BlackLivesMatter question at #GOPDebate? But we spent a half hour talking about fences?? pic.twitter.com/v7pqn2Qr84

*eyes roll into the galaxy*

And as New York Times campaign correspondent Maggie Haberman even commented during a live chat, the question “felt almost obligatory” and rushed before cutting to a commercial break for—wait for it—a Straight Outta Compton trailer.

But before Wednesday night’s second debate, many were already expecting race relations to get some heftier air time, especially after the way things went last time. It would, after all, have been pretty shameful to ignore an issue that’s become such a huge part of the national conversation in the last few years. And as at least one person on Twitter noted, the omission would have brought with it some unfortunate irony, given where the debate was held:

To put it all in perspective, here’s the one tweet that sums up everything you need to know about the presence of the #BlackLivesMatter in the minds and mouths of the 2016 GOP hopeful field:

Needless to say, we’re still waiting for the questions—and answers—we’ve been looking for.

Kaitlin Stanford is the Senior News Editor at Bustle.