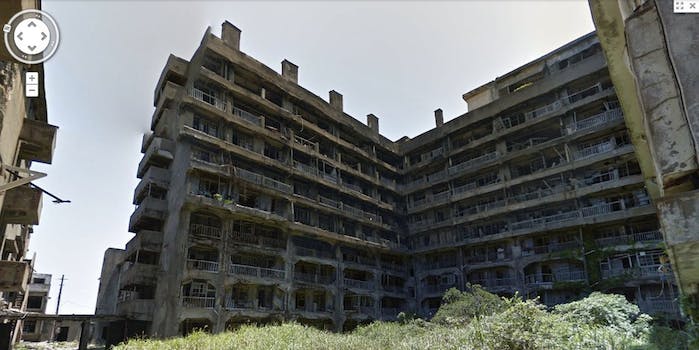 The Japanese island occupied by Javier Bardem's Skyfall baddie is a real place—but it's off limits to tourists.

Google Street View has captured a lot of strange things, but never before has it captured an evil villain’s lair.

Well, technically, it still hasn’t—but the newly mapped Hashima Island is the closest Google is going to get.

The setting of the latest James Bond villain’s evil lair, Hashima Island, is a ghost town off the coast of Japan, near Nagasaki. In the 1960s, more than 5,000 miners called Hashima home. After mining operations ended in the ‘70s, however, the entire island was deserted.

After years of erosion much of the island is now too dangerous for sightseeing. The filmmakers behind Skyfall weren’t able to film the movie on location, so they used a combination of computer-generated imagery and footage from an unnamed island near Macau.

Last week, Google Street View gave the world a window onto Hashima Island. The company posted this video to its Japanese YouTube page showing a man decked out from head to toe in cameras exploring what is known as “Battleship Island.” He explored the abandoned apartment complexes and mining sites on foot, making it possible for the rest of us to (virtually) do the same.

If you prefer adventure to awkward comedy, that is.