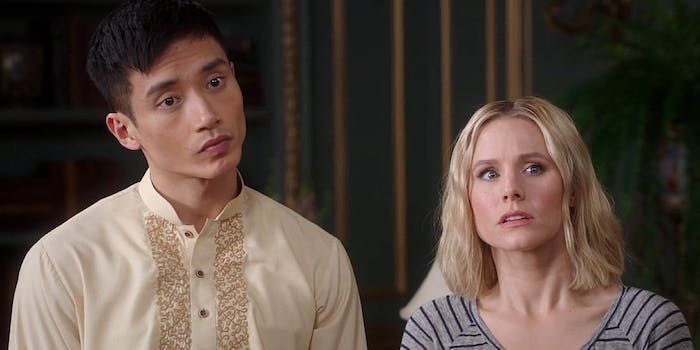 Why the internet loves talking about ‘The Good Place’

Everyone can relate to the show's quirky characters.

NBC’s The Good Place, a comedy about the afterlife, is a delightful and comforting TV show. To reveal too much of the plot would spoil everything for those who haven’t yet watched it, but here’s a brief summary: The show is about a group of humans who die and find themselves in an afterlife neighborhood called “The Good Place,” which is kind of like heaven. The neighborhood is run by Michael (Ted Danson), who furnishes it with several frozen yogurt shops and homes designed around each person’s individual taste and style. Besides Michael, the main characters include Eleanor Shellstrop (Kristen Bell), Chidi Anagonye (William Jackson Harper), Tahani Al-Jamil (Jameela Jamil), Jason Mendoza (Manny Jacinto), and Janet (D’Arcy Carden). All of the characters are great, and it’s hard to pick a favorite. They all play vital parts in the story.

The Good Place is a character-driven show. Sure, the plot is fun, and it provides sardonic commentary on the concepts of heaven and hell. But the show is really about what it means to be a human, and how everyone struggles to work through their unique set of insecurities and fears. If you’ve seen the show, you probably identify with at least one character. Maybe two. On Twitter, the illustrator Noelle Stevenson recently proposed a theory: “everyone is a mixture of 2 Good Place characters.”

The tweet took off. More than a thousand people liked it, and dozens of people replied with their two Good Place characters.

I'm chidi and jason or chidi and janet depending on the day's Mood™ https://t.co/FUnbpksfEK

The tweet was also reblogged and liked by hundreds of users on Tumblr.

Why was this tweet about choosing two characters from a TV show so popular? Well, The Good Place has a sizable fanbase on the internet, and it’s growing. The show was released in 2016, but many people (like the author of this piece) didn’t start watching it until last year, or early this year. The first season hit Netflix last August, and that likely caused more people to watch the show. If you’ve been active on Twitter or Tumblr in the last month, you’ve likely noticed an array of GIFs and screenshots from The Good Place. The popular Twitter account @nocontexttgp, like other “no context” accounts, tweets out screenshots from the show.

If you use Twitter and/or Tumblr on a daily basis, there’s a good chance you’ve seen at least a few screenshots and jokes from the show in your feeds. There’s a reason: The show is great, and now is the perfect time to catch up.

As for me, I’m definitely Chidi and Janet. I overthink every problem but I have good intentions.