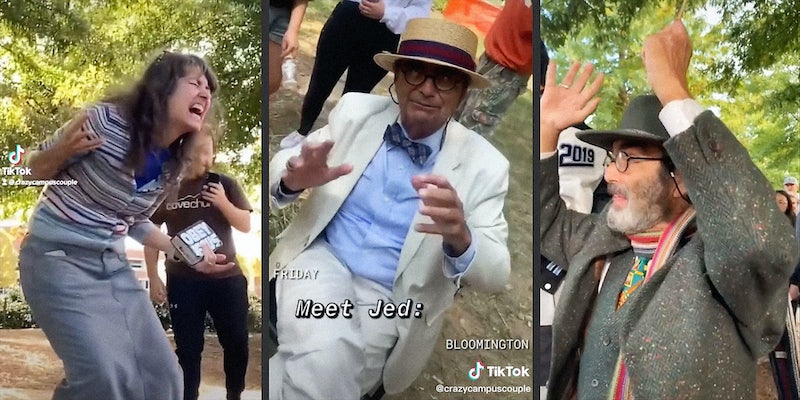 The story behind that ‘Good old-fashioned slut-shaming’ TikTok

Sister Cindy and Brother Jed are well known on campus—and now on TikTok.

On Tuesday, writer Ashley Ray posted a video of a woman, standing by a tree, stating that she is there to “do some good old-fashioned slut-shaming.” A small crowd goes wild.

The way the woman, known on college campuses as Sister Cindy, leans forward when she says “slut-shaming” became something of a meme, and in the thread, others posted previous videos and photos of her. Many remembered Sister Cindy from their college campuses.

But it’s not just Sister Cindy. The TikTok, which now has more than 15 million views, originated on the account Crazy Campus Couple, which was created earlier this week by photographer Reagan Lowden. She was inspired to post her videos from Auburn University in 2019 after seeing another TikTok of Sister Cindy, in which she screams about “vampire hoes on campus.” The other half of the couple is Brother Jed, who can be seen in videos saying he majored in “whoreology” and that dinosaurs “went gay.”

There are certainly some Westboro Baptist vibes here, but Lowden tells the Daily Dot she got to know them “fairly well” over their visits and that they’re “absolutely serious” about their evangelizing.

“The way they practice their Christianity has them minister to college students with what they call a ‘tough love approach,'” she says, “which basically meant telling all of us that we are whores that are going to hell.”

Brother Jed, real name George Smock, has been a fixture on campuses since the 1970s, and he met Cindy at the University of Florida when she was a reporter looking to do a story on him. On Brother Jed’s website, an archival photo from a 1979 Indiana Statesman article shows Cindy holding a Bible, dressed in a hat and trench coat, which is apparently her first photo in a newspaper. They appeared on a 1988 episode of Sally.

They’ve been to campuses across the country, and in 2013 relocated to Indiana. A 2019 article about the Smocks being cited for trespassing at Indiana University Bloomington states: “As Smock began using phrases such as ‘build the wall,’ and expressing his support for United States President Donald J. Trump, a group of students began to surround him, and the mood of the group surround[ing] him changed from amusement and mockery.”

The couple have been met with amusement and mockery on TikTok—the “slut-shaming” audio has already been used in thousands of videos, recontextualizing Sister Cindy’s misogyny.

The videos have also caused people to reflect on their interactions with the Smocks. In this stunning TikTok from wellashleyy, she recounts seeing Sister Cindy at the University of Texas at Austin in 2017 and countering her shaming of sexually active students by putting up a sign telling people where to get free condoms on campus.

“Anyway, I work in HIV treatment and prevention now,” she says.