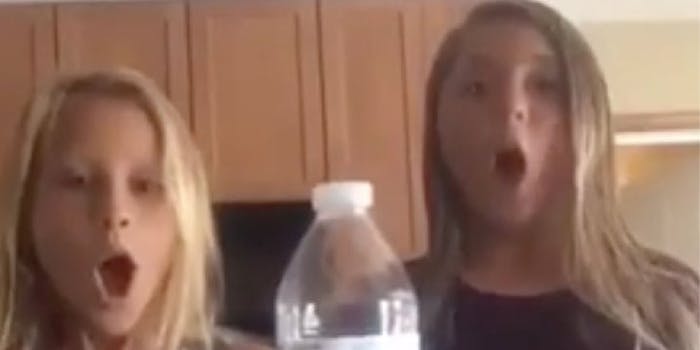 Water bottle flipping, a formerly useless talent, is having a moment in 2016. There was the guy who blew up his school talent show with a dramatic flip, the Olympic swimmer who flipped, and so many minor flipping incidents that someone wrote a sketch about it.  We’ve called out “the best water bottle flip of 2016” numerous times, but a better flip always comes along. This time, we may truly have found the ultimate flip.

What?! How is that even possible? I suppose it could be staged, but it looks like these girls were just trying to perform a simultaneous bottle flip on the lipsync app Musical.ly, and surprised even themselves with the way things landed. Let’s see that again in GIF form:

Goddamn, goddamn. What are the chances physics would cooperate in just this way? The first bottle was already down, and there was a split second where this thing looked like a total failure—instead, it’s pretty much the only cheerful thing happening on this day of post-presidential-debate acrimony.

This is one small, pointless victory that these girls will remember for the rest of their lives.