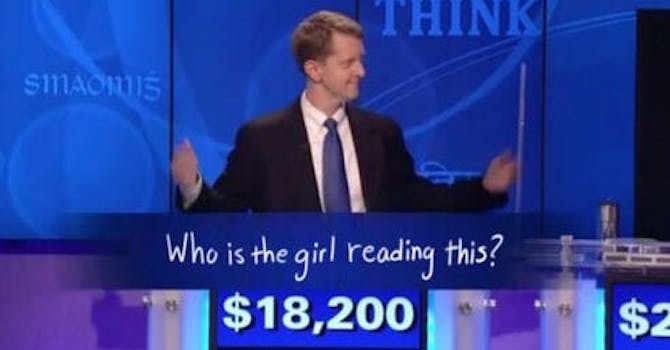 The ‘girl reading this’ meme is experiencing a revival on Tumblr

Who? The girl reading this, of course.

“The girl reading this.”

Maybe that doesn’t quite work, but “the girl reading this” is a punchline that reveals everything said up to that point was actually about you, the reader, the very girl reading this! It started on Tumblr circa 2012, and it looked something like this:

Variations on “So there’s this girl. She’s beautiful. She’s reading this right now,” have been floating around for the past five years, with images like this one featuring wrestling icon John Cena:

But now they’re back in a big way on Tumblr, and they’ve shifted from image posts to plain text—an interesting development, considering that memes usually go the other way.

Someone even wrote an elaborate poem that extends the meme:

“The girl reading this” is a successful meme because it’s a punchline that can be inserted anywhere, whether using images or text. That opens up a ton of opportunities for creative wordplay, which is the Tumblr meme community’s greatest strength. Could “the girl reading this” work on Twitter? Possibly, although the restrictive character count may limit its success. Could it work on Reddit? To be honest, it’s a little too refined for the current edgy tastes of Reddit memers—because it’s unlikely to offend anyone, they’d likely view it as a “normie” meme.

Nope, she started on Tumblr, and that’s where she’s likely to stay.

The girl reading this.