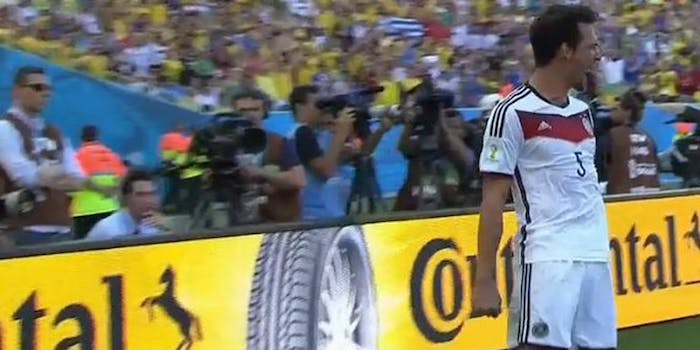 The Germans easily pushed aside France 1-0.

Germany is the first country in World Cup history to make four consecutive semifinals appearances. It did so with a sleeper hold, 1-0 put down of France Friday in Rio De Janeiro. The decisive goal fell off a sleepy 12th minute header from Borussia Dortmund central defender Mats Hummels.

Germany’s makeshift backline makes the European juggernaut an upset prime team, but that doesn’t matter when it can control the midfield from the start, taking 59 percent of the first half possession, and forcing France to chip away with seven early fouls.

The high-octane and young Les Bleus disappointed—scoring eight goals through their first two games but only two in the subsequent three games. Leading man Karim Benzema squandered two strong chances with poor finishes, including a point blank near post strike in stoppage time, and the midfield road block kept the French reaching to fabricate and attack.

That game down the left flank was led by 23-year-old Real Sociedad striker Antoine Griezmann and 21-year-old future French hero Paul Pogba. A Griezmann-led run in the 52nd and one extra Pogba dribble in the 76th were France’s best chances. Next, Les Bleus turned its sights to flourishing as a serious contender when France hosts the 2016 European Championships.

Germany looks surgical and controlled. Former captain Michael Ballack called the outing “good enough for today” after the game on ESPN. The winner of Brazil and Colombia is next, and that will be Germany’s biggest challenge—at last facing a South American team in Brazil.

As good as both France and Germany performed in Brazil, some dubious club affiliations seem destined to rear their karmic heads at some point.

Don’t get your hopes up. France and Germany both have too many Arsenal players to win the World Cup.