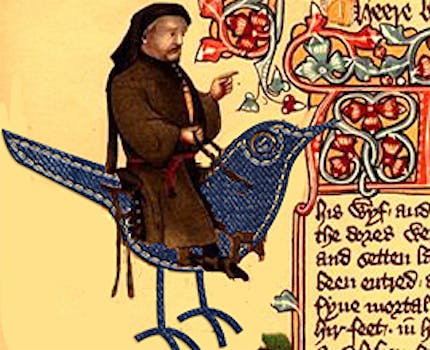 The 14th-century poet and satirist coined the word "twitter" nearly years before the invention of microblogging.

Say “Chaucer,” and most people think of the Canterbury Tales, or perhaps the 2001 jousting pastiche A Knight’s Tale.

But yesterday, on the 612th anniversary of the legendary English poet’s death, most people were thinking of Twitter.

“#Chaucer provides our earliest ex. of twitter, verb: of a bird: to utter a succession of light tremulous notes; to chirp continuously,” The Oxford English Dictionary reported yesterday—on Twitter, of course. “Currently, #Chaucer’s texts provide the first recorded example for over 2000 words in the OED.”

The OED also provided a word cloud for some of the most popular words that Chaucer introduced to modern English, including “monster,” “magician,” “Valentine’s Day,” and, of course, “Chaucer:”

Born to a middle class lifestyle, Chaucer served the court of Edward the Third as a page and later a diplomat. His travels took him to France, where he was briefly held as a prisoner of war, and Italy, where Boccaccio’s Decameron fired his imagination and inspired the 25 stories that would eventually comprise The Canterbury Tales. These are age-old stories that still find cultural echoes today—in the final Harry Potter book, J.K. Rowling based a climactic portion of the plot on Chaucer’s “Pardoner’s Tale.”

Even more powerful are the everyday uses of language that Chaucer contributed to modern English, along with phrases like “love is blind” and “let sleeping dogs lie (“it is nought good a slepyng hound to wake”).

The 14th-century satirist would doubtless have loved not only the proverbial fame he has continued to enjoy, but the royal treatment he received yesterday, with The Atlantic calling him “one of the formidable, formative masters of English language and literature.”

With six centuries of Chaucerian language alive and well, it’s hard to disagree—especially not when the linguistic evidence is all around us. After all, in the words of Chaucer, fields have eyes, and woods have ears; but thanks to Chaucer, the rest of us have tweets.