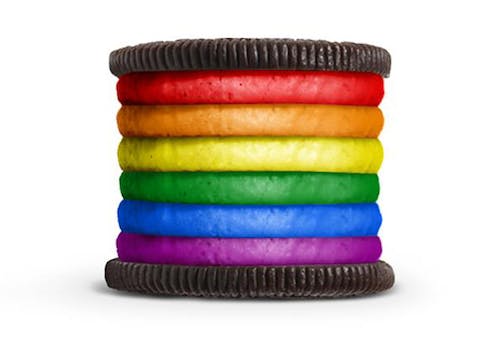 And it looks DELICIOUS!

Oreo is celebrating LGBT pride with a photo of a giant cookie with a rainbow of six differently-colored levels of frosting. Was it bravery? Or did the company know that, Facebook commenters being Facebook commenters, it would cause a lot of bickering and get them a lot of attention?

Either way, the company posted that image Monday evening, over the simple words “June 25 | Pride”. It was remarkably popular: twelve hours after it was posted, almost 33,000 people had shared the image, nearly 150,000 had clicked “like,” and almost 18,000 had commented.

The comments section is, of course, a quagmire, a morass of LGBT supporters, bigots, and trolls shouting at each other with little chance of being heard. It’s peppered with the occasional person who just wants, like Sophia Tucker, to eat that cookie.

“I wish you actually had rainbow icing cookies. I’d buy that and make these all day long,” she wrote.

More interesting is that Oreo included a faint disclaimer in the background: “Made with creme colors that do not exist.”

That didn’t stop one user, who created a change.org petition to convince Oreo to make the cookie in real life. She cited two reasons: “1. Gays deserve equal rights. 2. It looks DELICIOUS,” she wrote.