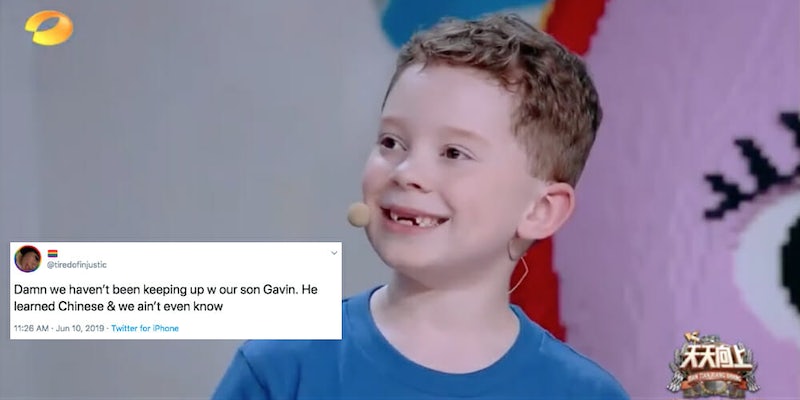 'When did Gavin learn Chinese? How is he so fluent? Omg.'

Gavin Thomas, who went viral in the heyday of Vine, has surprised both his American and Chinese audiences by speaking Chinese on Hunan Mango TV.

After a 10-second clip of the eight-year-old speaking Chinese went viral, fans tweeted their disbelief and appreciation for the effort which went into his learning the language.

It’s actually not all that surprising, considering Thomas is somewhat of an internet sensation in China. He has 2.4 million subscribers on Chinese microblogging website Weibo, an equivalent to Twitter or Facebook.

“A lot of people in China idolize him for his reactions enough there’s stickers exclusively of his reactions on Line or Weibo etc.,” Twitter user @mishawn_eugene wrote. “Makes sense for him to learn the language since his fan base is so large.”

Actually it’s turns out he’s a huge hit in China! A lot of people in China idolize him for his reactions enough there’s stickers exclusively of his reactions on Line or Weibo etc. Makes sense for him to learn the language since his fan base is so large.

Some fans tweeted reaction memes of Thomas to convey their own reactions to finding out that he spoke another language so well–and at such a young age.

Thomas is commonly referred to as “the son of the internet” by fans online. Many of the tweets featured users praising Gavin as “their” son or nephew.

“Our SON and KING can do ANYTHING. We STAN a bilingual icon,” Twitter user @ThatOneHonduran wrote.