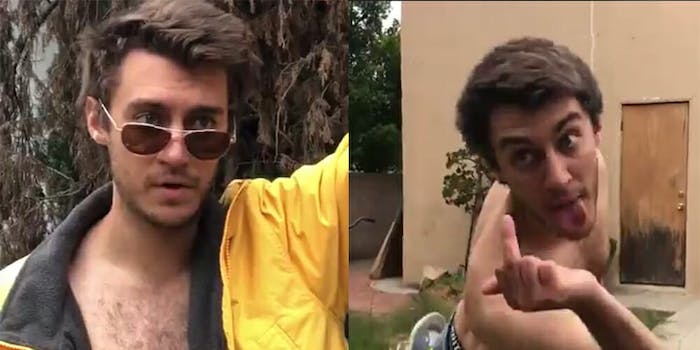 'The more I watch this the more I realize this is about the worker’s revolution.'

A new video from former Vine star and professional dancer Casey Frey has struck a chord with people online who have quickly turned it into countless memes.

Get tf out my way type way. @dvbbs @xxbridge pic.twitter.com/IOteUR8KLN

Prior to Vine’s deletion in Jan. 2017, Frey had over 250,000 followers on the app. Since then, Frey has taken to Instagram and YouTube. In his new videos, he usually plays the character of an exaggerated bro to surreal results.

Frey’s new video, “Get tf out my way type way,” displays his versatility as he plays all three characters in the sketch. As a version of himself wearing sunglasses mocks Frey for chopping wood and dancing, a third Frey donning an open button-up and a bucket hat takes notice and intervenes.

Some have pointed out what could possibly the hidden narrative of the video while others are using it to highlight man’s tendencies to self-sabotage: “the more i watch this the more i realize this is about the worker’s revolution,” someone tweeted.

It’s not likely that deep. It’s just a funny sketch with a built-in catchphrase.

the more i watch this the more i realize this is about the worker’s revolution https://t.co/LOft5P3jnQ

my sleep schedule me at 2am
deciding to
rearrange my
entire bedroom pic.twitter.com/VQ77G32EOS

me, hoping to escape
this casey frey video
and my compulsion to
watch it every time it
shows up in my feed this meme pic.twitter.com/PYqWabLsNi

The song featured in the video is “GOMF” by DVBBS featuring Bridge. Frey also stars in the official music video for the song.

It’s silly, light, and people like it. It’s easy to screengrab into reaction stills. In short, it’s a hit.