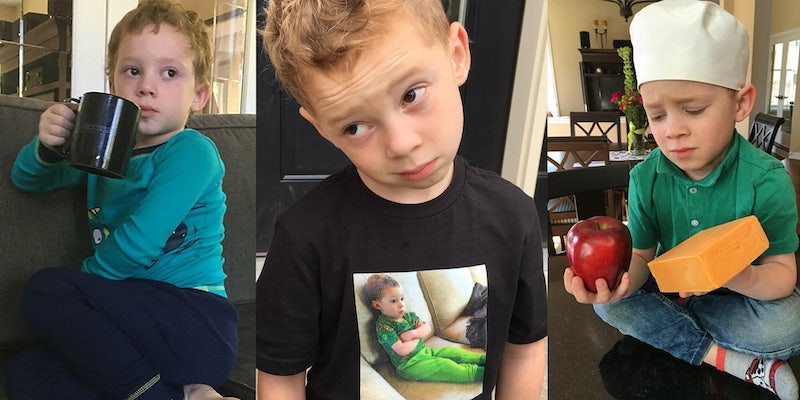 What it’s like to raise Gavin, the 6-year-old whose moods became memes

Being a meme parent is tough work.

Most days, the same little kid surfaces on my Twitter timeline via assorted memes. Whether it is an obviously Photoshopped grill or the popular pursed-lips photo, Gavin has a facial expression for any mood you’re in.

That’d be Gavin Thomas, the almost 6-year-old little boy whom the internet has loved seemingly all his life. Over the course of his social media stardom, his countless multitudes have given new meaning to the term “relatable.”

when an attractive guy is trying to get past you and he touches your lower back to get through pic.twitter.com/VWtxQ8L7xo

when you wanna tell your parents a story but you remember it was all illegal pic.twitter.com/NcqWLwFRwM

Gavin attends kindergarten in Minneapolis. What sets him apart in his class is an innate ability to make others laugh.

It was a few Vine features on his uncle’s account back in 2013 that first lifted Gavin to viral fame. That uncle is Nick Mastodon, one of Vine’s earliest stars, who amassed followers with his video compilations of Top 40 hits and Disney movies—and, eventually, with primo Gavin content.

In the spring of 2014, Mastodon posted a video of Gavin’s reaction to a lizard crawling on his forehead. The faces Gavin made were priceless, and his star took off from there. Since then, Gavin memes have been posted on top meme Instagram and Tumblr accounts and all over Twitter.

But being meme-famous at such a young age does come with its responsibilities. Gavin’s mom, Kate Thomas, knows people recognize her son, but wants him to live normally.

“We’ve had a few people notice at school and we’ve worked with his teacher to make it so it’s not distracting,” Kate tells the Daily Dot. “We want him to still be a normal kindergartner—as much as we can.”

Normal is not always the case. Local trips to the grocery store or the mall often result in someone spotting Gavin and wanting a photo.

“If a person comes up to him, he’ll decide if he wants to take a selfie depending on what his mood is, because you just never know with a 6-year -old. We absolutely leave it up to him,” says Thomas.

But mom plays a big, facilitating role in his success. The majority of the photos that have gone viral have been taken from either Thomas’ or Mastodon’s Twitter and Instagram accounts. These are the only official Gavin accounts that exist, but she maintains close relationships with his parody and fan accounts.

“We have the type of relationship where I can say I don’t feel comfortable with that post, or this was a little too out there, and they will immediately take it down. At the end of the day, he’s still 6. There are just some things I do not want his photo attached to,” Thomas says.

Not only does Thomas have to keep a close eye on the memes that are made about her son, but she faces constant backlash about encouraging his meme-ification.

“I just remind them that I’m not creative. I’m not funny. I don’t make any of the memes,” Thomas says.

Gavin memes take on a life of their own, after all. Gavin’s countless attitudes are the foundation, but she can’t do much to control user captions.

And for those who think Gavin is just accidentally funny, the kid does have talent. He’s been signed to Caryn Model & Talent Management and has been featured in commercials and print publications. Gavin has even been recognized by celebrities like Simone Biles, Laurie Hernandez, Halsey, Hoodie Allen, Katy Perry, Skai Jackson, T-Pain, and others.

@Simone_Biles when you win a gold medal at the Olympics: pic.twitter.com/tyhs9gD0ya

Thomas says the most memorable public encounters are with the fans. Gavin’s memes are first and foremost about condensing the human experience into sharable emotions. As such, they don’t run on biting wit, but an ability to elicit smiles.

when the squad takes a group pic without you pic.twitter.com/L0082Rpq3X

when someone makes fun of you but you could ruin their life with what you know about them pic.twitter.com/2APLE8tUYx

“I’ve heard so many people say they’ve had a bad day and Gavin brings a smile to their face. It has been fun to share a little piece of him with the rest of the world,” Thomas says.