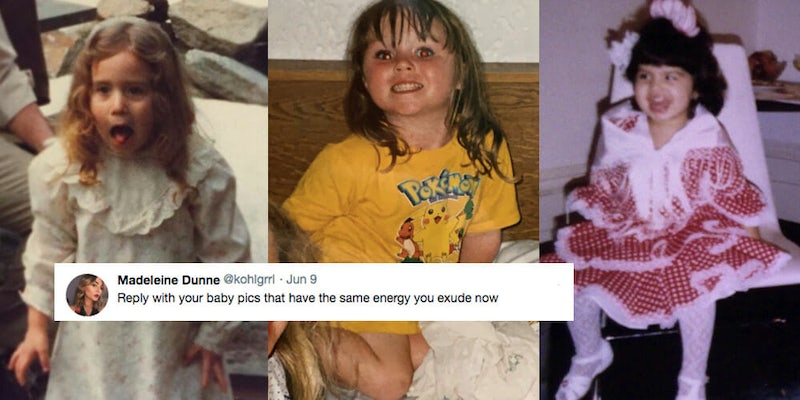 The more years we rack up, the easier it is to feel like we’ve come so far from where we started. Every one of us has undoubtedly overcome so many obstacles, made emotional breakthroughs, and traded bad habits for at least slightly better ones.

But then you see something from your childhood that makes you realize that, nope, none of us ever really change that much, do we?

It might be a trophy from that time you went to baseball camp when you’re still playing games with the office team every other weekend or a writing assignment from fifth grade about how you wish your family would win the lottery while a ticket for tomorrow’s Powerball burns a hole in your pocket. Or maybe it’s just a photo of you that exudes something less tangible, something you can’t explain. Maybe you’ve still just got the same energy.

Journalist Madeleine Dunn certainly feels that one, and she started a trend on Twitter of folks sharing “same energy” photos from their childhood.

She kicked it off with quite a doozy herself:

Reply with your baby pics that have the same energy you exude now pic.twitter.com/j7ATjOYd2E

It’s a riff on a meme we all know too well—sharing photos of two things that maybe don’t really resemble each other, but they just feel the same, you know? Only this time, it’s all about US, and considering no one ever passes up a chance to share ridiculous photos of themselves on social media, Dunn’s personalized twist on the ‘same energy’ format caught on pretty quickly.

Exactly ten minutes after this photo was taken I fell off the swing and knocked my teeth out. pic.twitter.com/MXpbfyeeqF

This is such a relatable trend that even celebrities got in on the fun.

And we certainly can’t exclude our four-legged tweeting friends.

Hi frens! I was a widdle guy too! Now I’m a 100 lbs of fluff. pic.twitter.com/hKUciwL4qv

It’s true that sometimes the past is better left in the past, if only so we can lie to ourselves and claim we’ve made huge strides and are vastly different people from the small ridiculous children we all inevitably were, but… on the other hand, sometimes it’s just amazing to see how destined we all were to be roughly exactly who we turned out to be.

Even if the original poster has had some regrets.

My face enduring the onslaught of baby photos I asked for knowing fine well children make me uncomfortable pic.twitter.com/4ndoxYRiFa