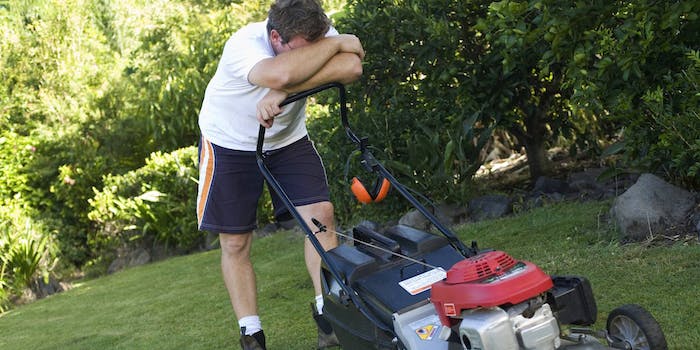 Amidst questions of whether Donald Trump is bad for women, black people, Latinos, immigrants, Muslims, people seeking abortions, poor people, and beauty queens, we completely forgot about one essential part of the American population. But thankfully, Gary Johnson is on it.

Debate after debate, nobody has asked the question: Why do Washington insiders ignore the mowmen? Who is the candidate for America’s landscapers? Well, let’s find out.

According to Hillary Clinton’s proposed policies about labor and workers’ rights, she plans on investing in small businesses and labor jobs, and expand the Affordable Care Act, which is increasingly essential as more Americans turn to freelance work and independent contracting. Considering how many mowmen work for themselves, this seems enticing.

Donald Trump has fewer specifics on his site, though he does promise job growth. He also supports the anti-union “right to work” platform, which could leave mowmen with fewer resources and job protections. However, Trump does provide for the mowmen individually: It costs over $100,000 a year to keep up the greens at his Palm Beach home. So one lucky landscaper could be in for a treat thanks to Donald Trump! Presumably, that position is what this Trump supporter was applying for when he mowed Trump’s name into his own lawn.

Gary Johnson agrees that labor unions hurt the economy and that it’s the responsibility of entrepreneurs, not the government, to create jobs. It’s up to the free market to provide you with lawns to mow, mowmen, so stop looking for government handouts!

Jill Stein, on the other hand, believes in a $15/hour minimum wage, single-payer healthcare, and making it easier for workers to form unions. However, as a member of the Green Party, she may understand that manicured, green lawns are terrible for the environment and want our nation’s mowmen to design sustainable landscapes that protect native species. Mowmen seem like a savvy bunch, though, and could easily pivot.

So, Mowmen of America, there you have it. Nov. 8 is just around the corner. Choose wisely.