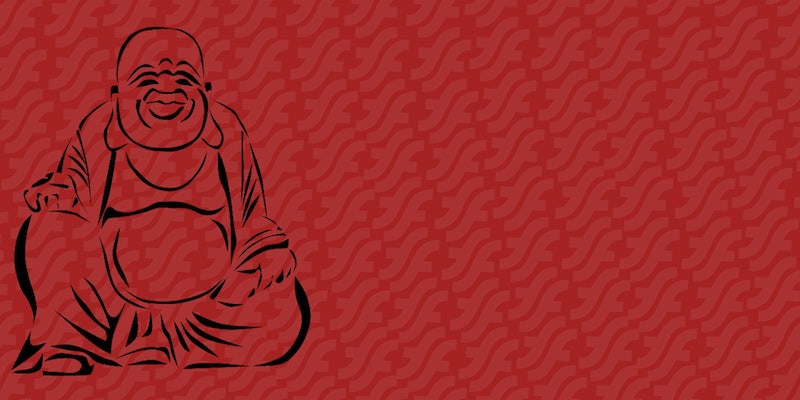 You don’t need another app—you need to stop, and breathe

Could meditation be the cure for our multitasking ills?

By now, we’re all well aware of the high toll of stress the Internet charges the human body: dry eye from staring at the screen and not blinking; muscle distortion from staying in the same position too long; cramps mental and physical from not breathing—deeply, that is—because we’re distracted.

It turns out we’re all the pathetic airhead who can’t breathe and chew gum at the same time—jerks who can’t multitask. Although any mother of toddlers could’ve told us, science has now shown humans damage themselves attempting to juggle too many things at once. Something’s always dropped and we get hurt. Spring flooded the Web with revelations about the dangers and horrors of multitasking (thanks to tech). Ira Flatow of NPR publicized the inconvenient truth that multitasking destroys focus, the ability to detect relevancy and periphery, manage ideas or rouse any useful cognitive function at all. A few days later, Stephen Colbert satirized technological multitasking with extreme exuberance, mistaking his laptop for a pizza box and eating his phone instead of pepperoni. 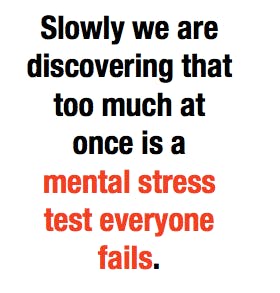 It’s true that multitasking is a must these days. But slowly we are discovering that too much at once is a mental stress test everyone fails. The question of how to deal with this modern dilemma propelled the good folks at Adobe Systems to try a new flash player: Shakyamuni Buddha, packaged as Project Breathe.

Given the enormous traffic jam now clogging the road to happiness, it was inevitable that Buddhism, the old religion of hard reality, would collide with the new religion of virtual reality. After all, they’re both aimed at the same goal and powered by the same three little words: “now,” “connect,” and “happiness.” The essence of Dharma, as His Holiness the Dalai Lama puts it, is that yesterday cannot be changed, tomorrow cannot be known, so all we have is today. Being present to the present is the gift of the Buddha.

In a way, “Be here now” is also the very gist of the Internet—its much touted source of happiness. According to Adam Bain, Twitter’s president of global revenue, “Twitter is a series of ‘now moments’ across the world.” Ditto Instagram and the counterintuitive Snapchat, that brags about its unique feature of no longevity at all: now you see the message, now you don’t. Right now is the Web’s motto. To have to “wait a sec” is to be damned. 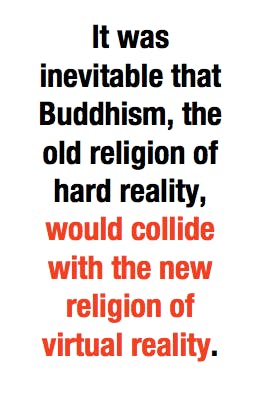 Well, just to see what would happen, Adobe let a few employees hit escape. The point of Project Breathe was, as the Insight Meditation teacher Sylvia Boorstein once described Buddhism: Don’t just do something, sit there. Would that make the employees more creative, happier, productive, healthier, or more loyal?

Every day for one month, 116 employees at four of its office complexes—Boston, Seattle, San Jose and San Francisco—voluntarily walked off the job to do 15 minutes of authentic Buddhist meditation. Virgins on the cushion, they were given instructions downloaded from a revered, elderly Tibetan guru, teacher to one of Adobe’s employees (and to me, which is why I know about this). For 15 minutes, either at the start of or in the middle of the workday, these employees sat still and did nothing but focus on the reality that their bodies were busy taking in air. They paid attention only to their breath, letting everything else go. In and out, in and out, air going deeper and deeper into the body. 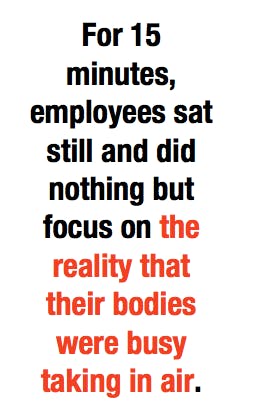 What happened was, by any company’s standards, undoubtedly good for business: productivity, the ability to juggle, creativity and happiness all increased by large margins. The largest increase of all was the ability to fo cus.In just four weeks, company medical personnel also noted significant physical improvements. Resting heart rates decreased, blood pressure dropped, hypertension or prehypertension lessened or disappeared.

Nearly everyone wanted Project Breathe to continue. Volunteers claimed that breathing turned out to be very helpful: that they were much more productive at typically low periods, such as the “afternoon slump”; they also described became more aware of how they were feeling, both during breathing exercises but also the rest of the day. They reported help in focus and staying calm when overwhelmed, and a decrease in worrying about what they could and could not accomplish in one specific moment—there would be others. 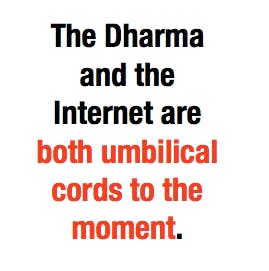 The Dharma and the Internet are both umbilical cords to the moment. At their best, they are the connection that breaks through the firewalls of individual isolation, so that you merge into something huge and universal. The Dharma does it through focus on your breath, the intake of air, and plugs you into the enormous invisible reality all around us: you sense the dance of energies and, moment by moment, adjust your rhythm to feel completely alive.

The Internet, on the other hand, hooks us up to the infinite crowd. It makes us feel as though we are someone, even if we are only following. We click to like, or to comment, or friend, and presto! we are leading our lives as part of something bigger—we are not alone. Missing a moment on the Web becomes a power outage. We insist on staying connected, no matter what else we may be doing (a multi-tasking obsession that is now gifting us with buttons in our car dashboards to update Facebook while driving).

Don’t hold your breath is the mantra of both the Dharma and the Internet—and surprisingly, breath may actually be a valuable link between them. We talk so much these days about sustainability; sustainability is precisely what the Dharma offers multitasking addicts and intrepid Internet surfers. It grants us a staying power that breaks the clots and dams of distraction, of shortened attention spans. The Dharma’s “now” lasts—because it is a prelude to a better later. The real question we are being presented with is whether, in the congestion, to dare to breathe or not.

Formerly a reporter, Sandra Garson is now a writer and teacher. A regular blogger for Beliefnet, she is the author of Veggiyana, the Dharma of Cooking and How to Fix a Leek and Other Food from Your Farmers’ Market and founder and president of the Buddhist food charity Veggiyana. Garson is an eHow cooking expert and an advisor to several culinary businesses.