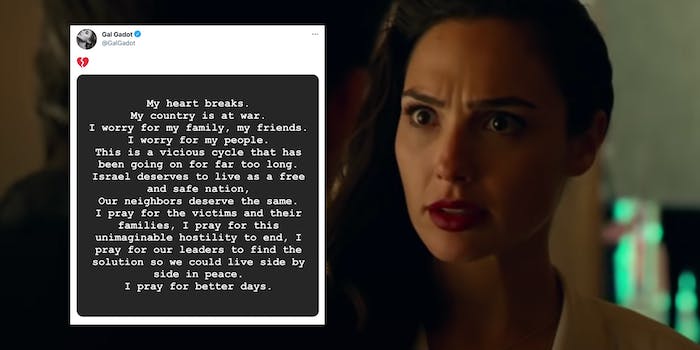 'How can you advocate to stop the vicious cycle of terror when you are a very part of it.'

Gal Gadot is being criticized online for her statement on the ongoing violence occurring in the state of Israel that has killed mostly Palestinians.

The Wonder Woman actress, who is Israeli and completed mandatory service in the Israel Defense Forces (IDF), posted a written statement to her Instagram and Twitter accounts calling for peace and wishing for “the solution so we could live side by side in peace.” Although she did not refer to Palestinians by name, she referred to the conflict between her fellow Israelis and what she called “our neighbors,” implying Palestinian people. Comments and replies are disabled on both posts.

People are accusing Gadot of being hypocritical in her plea for a peaceful resolution. She has been accused in the past of perpetuating Zionist and pro-IDF messaging. The IDF has been condemned by critics for carrying out “ethnic cleansing” of Palestinians in the region. Because of this, folks have previously suggested a boycott of Gadot’s work because of her (literal) role as a soldier.

Twitter users took to quote tweets to criticize Gadot since they could not respond to her post directly. Several pointed out that her language, while attempting to be diplomatic, mischaracterized the struggle happening between Israelis and Palestinians.

“your country is not at war gal gadot. it is systematically killing and displacing palestinian families.” one user said. “40 palestinian children injured and 10 children have been murdered by israeli forces. it’s not a war, it’s genocide. #GazaUnderAttack #PrayForPalestine.”

“Reminder Gal Gadot served in the IDF for two years where she not only witnessed the ethnic cleansing of Palestine firsthand but also actively supported it,” another person tweeted. “How can you advocate to stop the vicious cycle of terror when you are a very part of it.”

Gadot is one of the latest celebrities to take a stance on the current conflict in the region. Bella and Gigi Hadid, who are half-Palestinian, recently took to Instagram to speak out about the violence against Palestinians. Other celebs like the Weeknd and Dua Lipa have also apparently shared their support for Palestine on social media. And in more subtle positioning, eagle-eyed netizens noticed that Brie Larson may have unfollowed Gadot on Instagram for her statement on the issue.