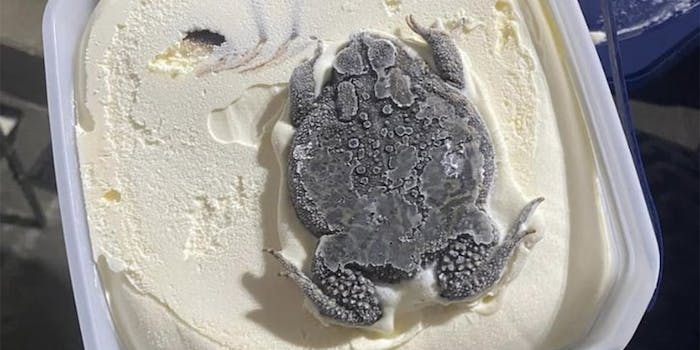 'OH HELL NAW WHY THEY DO HIM LIKE THAT.'

Recently, a Facebook post showing what appeared to be a frog frozen in a tub of ice cream went viral, sparking disgust and debate across the internet.

It’s difficult to verify who first posted the photo, though it appears one of the earliest iterations came from a Facebook account under the name of Tracy Wiemelt Holtman. In this version, Tracy claims to have purchased the ice cream herself from a local Hy-Vee.

Tracy speculated in the post that the Blue Bunny ice cream must have come from the factory with the frog inside as it was sealed. She also said she planned on attempting to return the ice cream.

While Snopes claimed it could not verify who first posted the image, Tracy is a likely candidate. Many reposts keep her phrasing verbatim, which includes a reference to someone named “Morgan.” In other Facebook posts, Tracy tags a woman named Morgan, who appears to be her daughter.

In response to the Daily Dot’s inquiry, Blue Bunny’s parent company, Wells Enterprises, acknowledged “the product in question is made by Wells Enterprises” and “confirmed this could not have occurred during our manufacturing process, but instead would have taken place after the product left our facility.”

A representative for Wells Enterprises added that the company investigated the incident and reached out to the “affected customer.”

“Product safety is our top priority at Wells, and we consistently achieve the highest quality standards in our facilities and in our manufacturing processes. We have robust quality systems in place, and constantly evaluate our standards and processes to prevent anything like this from happening,” they said.

Furthermore, other users on Twitter claimed that, if the frog had actually jumped in during the manufacturing process, there would be signs of a struggle and the frog would have left a deeper impression in the ice cream.

Regardless of the authenticity of the image, users on Twitter were quick to share their disgust as well as their concern for the frog.

“OH HELL NAW WHY THEY DO HIM LIKE THAT,” a user wrote.

“That’s enough internet for the day,” another added.

Others made jokes at the frog’s expense.

“Do you think hes okay,” a second asked.

Update 8:45am CT, June 30: When reached for comment by the Daily Dot, Tracy insisted the photo is legitimate, claiming she did not realize she was posting publicly when she first shared the image.

“I only sent them the message so they knew and could investigate it. When I posted it online I didn’t realize my post was on public, so I thought only my friends could see it. Obviously I didn’t post it for any kind of money or anything,” she said via Facebook direct message. “By the time I realized it was public it was the next morning and it had already gone viral. I have changed the setting now but everyone has already seen it.”

While Tracy said it was sealed prior to her purchase, she claimed there was something visibly wrong with the ice cream package before she opened it.

“They don’t come wrapped, but it was clearly never opened prior to me purchasing it,” she recalled. “The lid is actually deformed where the toad is at in the container.”

As for Blue Bunny’s explanation of events, Tracy is confused.

“[The] day before yesterday they said ‘no way it happened in their facility’ and basically blamed me. I said I didn’t ask for anything so not sure why I am being blamed. I asked for that in writing and they responded with ‘it is still under investigation,’ miraculously,” she said. “I don’t know what is happening.”

“The company is insinuating in their response to the media that this is made up. I have no idea why anyone would make this up. I have nothing to gain by doing that,” she concluded.