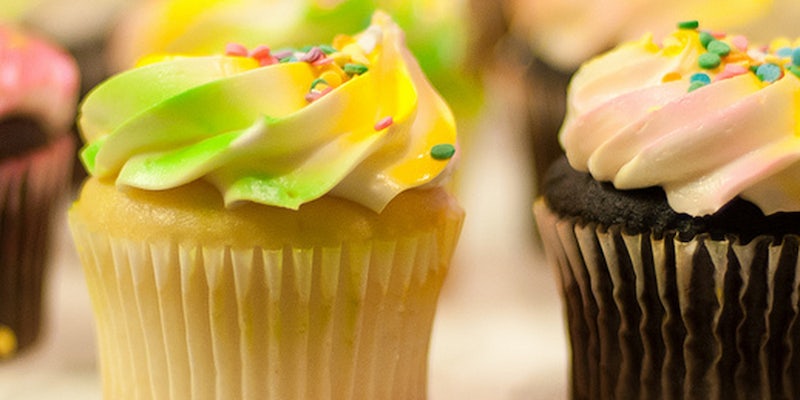 Here’s the best way to troll someone at the gym

Life without sugar takes its toll.

Sure, the offer of a complimentary cupcake before or after a workout is far from typical in New York, but that hardly explains the fury engendered by a trollish on-the-street segment shot for the comedy talk show Running Late with Scott Rogowsky. After all, Rogowsky just wanted to reward gym-goers for their dedication to self-improvement—and maybe test their willpower.

Soon after Rogowsky was chased off the scene, however, a personal assistant (Abe Groening, son of The Simpsons creator Matt Groening) took his place and found himself the target of ugly schoolyard taunts.

“The green polo guy,” Rogowsky told the Daily Dot in an email, “was aware of the cameras and said, ‘The only thing saving you right now is the fact that they’re taping’—implying that if there were no cameras, he’d beat the living shit out of Abe.”

Another irate man, Rogowsky said, told a passersby that Groening “had poisoned [the cupcakes] with ‘acid.’ I don’t think he was referring to amino acids, which admittedly, they were chock full of.” Even so, few of the pastries went to waste: “One of the kids at the end was going off: ‘This is my third cupcake! This shit tastes like everything!’”

Meanwhile, for the first time in Web history, a halfway salient point appeared in the YouTube comments: “i blame the gym for puting the running machines in front of the windows to use their customers as propaganda to make the people walking in the streets like they are lazy bastards.”