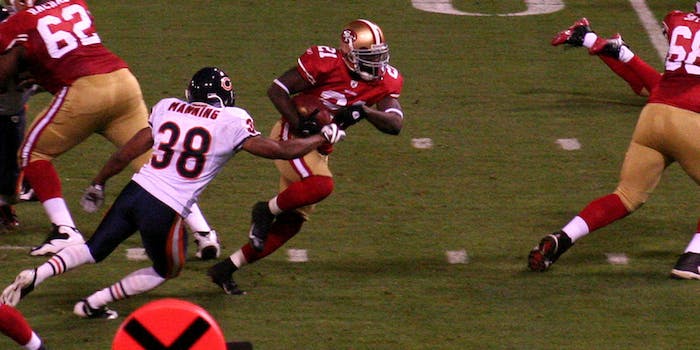 Frank Gore was thought to be signing a free-agent contract with the Eagles. Even though he probably won't, that hasn't stopped a Philadelphia fan from remembering the good times.

NFL free agency kicked off Tuesday afternoon with a flurry of activity, but most of the conversations between teams and expected free agents had been ongoing for the 72 previous hours. Which is why it was reported Sunday that former San Francisco 49ers running back Frank Gore would sign a three-year deal with the Philadelphia Eagles worth a guaranteed $7.5 million for the first two years of the contract.

It was a decent-enough deal for a soon-to-be 32-year-old RB whose 2,784 career touches are the second-most of any active player, especially since top-notch RBs have been so badly marginalized this offseason.

On Monday, it was reported that Gore had changed his mind and that he wouldn’t take the Philadelphia deal (as of this writing, he’s reportedly leaning toward signing with the Indianapolis Colts, so he probably won’t have to worry about joining Steven Jackson’s Save The Running Back organization any time soon).

But just because Gore’s trip to the City of Brotherly Love has been canceled, that doesn’t mean those Eagles fans won’t remember all the memories Gore gave to the city. And thus, one enterprising (and clever) fan put together a sweet YouTube video that runs through the entirety of Gore’s career in Philadelphia.

(Make sure to get those tissues ready. This one shoots the dust directly into your eyes.)

1) The return of Sarah McLachen into my life. I haven’t missed her much, but still…

3) And of, course, this indelible image that nobody (whether you’re an Eagles fan or otherwise) will ever forget… For a fanbase that’s been known to be one of the nastiest anywhere in the NFL, the fact this particular fan was so moved by Gore’s contributions to the Eagles that he spent (probably) hours and hours editing this piece is a tribute to Gore’s talent and humanity. May the city of Philadelphia, much in the way it reveres Rocky, never forget Frank Gore and everything he ever did for the city.