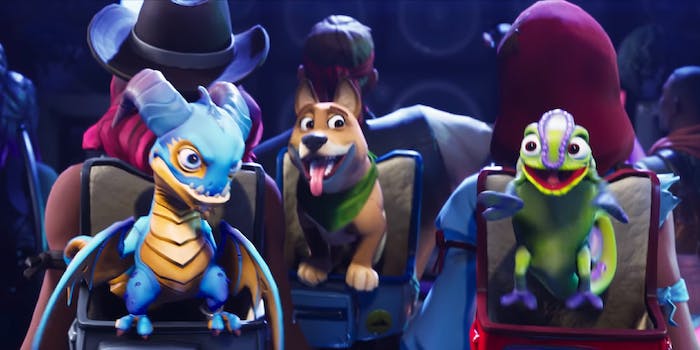 Fortnite has pets now, and Twitter is falling in love

They're just too cute.

Fortnite: Battle Royale Season 6 dropped today, and along with a ton of new skins and map changes, Fortnite also introduced one of the most important features in the game’s history yet: Doggos.

Players that purchase a Season 6 Battle Pass can grind experience points and unlock three different pets: A dog, a chameleon, and a tiny dragon. It’s a pretty nifty little cosmetic, albeit a simple one. Pets just sit on your back and hang out as you run around the game killing opponents, and they don’t provide any gameplay improvements. They’re just furry friends.

Drop in game now for:

But pets are pets, and the internet loves pets, so it didn’t take long for Twitter to collectively lose its cool after the feature leaked.

THERE ARE NOW PETS IN FORTNITE. I REPEAT. PETS. IN. FORTNITE. THIS IS NOT A DRILL

look at that doggo omg pic.twitter.com/vkklqlya9n

I need those pets on fortnite

Pets are so cool that Fortnite players are declaring Season 6 the best season to date. All hail Epic Games.

I’ve spent the last 15 minutes reading up on Season 6 of @FortniteGame This genuinely looks like it could be the best season yet. Tons of proper ballances, awesome skins, tons of interesting locations/additions to the map, and PETS!!!!!

I can’t wait to get off this afternoon

Fortnite giving us pets
i love it pic.twitter.com/Jplc124IN3

Oh yeah, this is definitely the "win over the furries" seasonhttps://t.co/DgfmeGt6uH

Best part about Season 6 @FortniteGame…
Cosmetics
Now with pets, lots of capes and even music! Probably the best battle pass so far

But there are so many unanswered questions about the pets’ appearance in Fortnite. Players regularly shoot, bludgeon, and explode their opponents to death, so it’s unclear if the pets are safe during any of the game’s firefights. Others flat out refuse to kill anyone with a pet, because why would you do that?

Oh God, Fortnite's pets. WHAT HAPPENS TO THEM WHEN YOU DIE? pic.twitter.com/hHCwU1omQ6

If fortnite adds pets, catch me playin PUBG, I’m not about to shoot a fucking dog

I swear if they make us hurt these pixel animals

John Wick is about to get his dog back… #Fortnite #Pets

If you see him w/ his dog just go the other way… pic.twitter.com/6t09Des1Dl

Me if anyone shoots my fortnite pet pic.twitter.com/yrexvZyYAL

Most importantly of all, everyone agrees that Fortnite’s new feature is about to take away their hard-earned cash.

If pets come to Fortnite I will officially go broke

FORTNITE IM BROKE ALREADY PLS DONT DO THIS TO ME https://t.co/2lO3t9Nutq

Then again, all of our Neopets, Nintendogs, and Tamagotchi haven’t been fed in a long time. Maybe we should skip out on getting another virtual pet until we take care of our others first.

webkinz had it rough

In the meantime, you can get your own pupper by purchasing a Season 6 Battle Pass in Fortnite: Battle Royale. To get started, head over to Epic Games’ official website and set up an Epic Games account. Fortnite is available for free across PlayStation 4, Xbox One, PC, Nintendo Switch, iOS, and Android, and the Season 6 Battle Pass can be purchased for 950 V-Bucks (or $9.50).