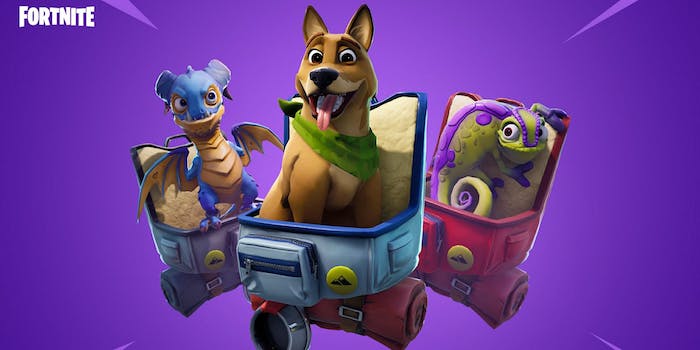 That’s right, Fortnite has pets now, and here’s how to unlock all of them

They're way too cute.

This isn’t a drill: Fortnite: Battle Royale has pets now. That’s right, you can run into battle with your very own puppy.

Fortnite developer Epic Games unveiled the new addition as part of Fortnite Season 6, the game’s latest Halloween-themed content drop. Pets are available as an in-game cosmetic that can be acquired by purchasing and leveling up a Battle Pass. From there, simply grind for experience points, and you’ll have your own dog or dragon in no time.

Pets work a lot like the game’s back bling skin, in that players can equip their unlocked pets by throwing them on their backs before heading off to a battle royale match. Don’t worry, you don’t have to feed your pet or visit them regularly. Pets are just a cosmetic, so while they won’t help your chances of winning that sweet Victory Royale, they’re still pretty cute to look at from the player’s point of view.

There are seven different pet skins that players can unlock in total, split between three different species: dogs, chameleons, and dragons. Once you unlock them, they’re yours forever, so you can keep wearing your favorite pets even when Season 7 hits. In the meantime, here are all three pets and how to unlock all seven skins.

That’s right, Bonesy is the very first pet that players can unlock in Fortnite. You can grab this little pupper by reaching Tier 12 on the Season 6 Battle Pass.

Next up is Camo, a chameleon available as a Tier 29 reward on the Season 6 Battle Pass. Unlike Bonesy, Camo doesn’t have any unlockable styles, but he’s still a pretty cool addition for any player’s avatar—even if he’s not quite as cuddly and friendly as his dog counterpart.

Fortnite: Battle Royale’s third and final pet unlock is a dragon. This scaly little buddy can be unlocked at Tier 43 on the Season 6 Battle Pass, and like Bonesy, he has unlockable styles too. Scales is the third and final pet model that players can pick up. The next few pets are just new skins for Bonesy and Scales. These are purely optional, but if you want to show off on the battlefield, you’ll want to equip the most elite skins possible before you hop online.

Bonesy’s White skin lets players dress him up in an arctic fur that’s sure to stand out for all the right reasons. Players can unlock this skin by reaching Tier 59. After which, simply head on over to Bonesy’s base model and select the skin in order to use it.

You can unlock this skin by reaching Tier 74 on the Season 6 Battle Pass.

Bonesy’s Mocha look is honestly his best, in part because it hits that perfect image of a stereotypical German Shepard. Also, it’s really cute.

Bonesy’s Mocha skin is available for all players that reach Tier 90 on the Season 6 Battle Pass.

Last but not least, there’s Scales’ Black skin. This look isn’t messing around, and it’s also pretty difficult to unlock. You’ll need to reach Tier 98 on the Season 6 Battle Pass in order to equip it, so only the most diehard Fortnite players will be able to grab Scales before the season ends.

That’s every single skin and pet available in Fortnite: Battle Royale. Remember, you have 69 days to unlock them all, so get to work.