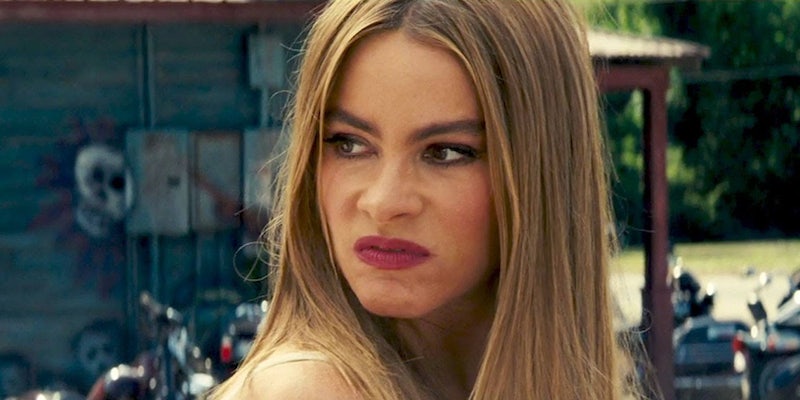 Sofia Vergara is a one-woman industry, but according to the Internet, that's still not enough.

Being a TV star seems like a lucrative business, and it is—but, apparently, it’s not nearly as lucrative as being a boxer, musician, movie star, or television personality like Ellen DeGeneres.

This is judging by Forbes’ list of the 100 highest-paid celebrities, which hit the Internet this week. It includes just three TV actors, two of which are women. Both Sofia Vergara and Kaley Cuoco-Sweeting cracked the Forbes 100 list, thanks to their roles on the popular and lucrative comedies Modern Family and The Big Bang Theory, respectively. The only other TV actor to make the list was Cuoco-Sweeting’s The Big Bang Theory co-star Jim Parsons.

Given how low representation for TV actors was on the overall list, the stats don’t seem to shabby, right? Well, yes—until you take into consideration the TV actors and actresses-only list.

Vergara and Cuoco-Sweeting tied for the number-one spot on the TV actors and actresses-only list (Vergara and Cuoco-Sweeting came in at number 95 on the Forbes 100 list, while Parsons came in at number 89), pulling in $28.5 million each last year. The reasoning for this isn’t just because the actresses are the leads of the two most lucrative comedies on TV: They both also have major endorsement deals, and in Vergara’s case, a production company. All of these extra gigs add to their overall net worth, raising them to a level that most TV actors just cannot contend with, financially speaking.

It is also wonderful to see that TV is represented on the major list by two women and an openly gay actor. At least the top three TV earners are a diverse group. It’s just too bad that the TV only list goes downhill from there.

In Forbes analysis of their overall findings in the medium of television acting, they note:

While the salaries of the actresses on this list are undeniably substantial, TV stars still experience a significant pay gap when compared to their male counterparts. The cut-off to be on this year’s list of top-paid TV actors was $9.5 million—$4.5 million more than that for TV actresses—as we continue to see actors out-earning actresses and landing the lead role more often. As with racial diversity, this underrepresentation of females is found across the entertainment industry and in all aspects of development. According to the aforementioned study, women are underrepresented among cable comedy and drama leads, broadcast reality leads and cable reality leads. Among creators of both broadcast and cable comedies and dramas, women are underrepresented by a factor of at least two to one.

Once the list moves past the top three, the findings are dismal. For instance, The Big Bang Theory‘s Johnny Galecki nabs the number-two spot on the actors’ list with a total of $27 million, while Modern Family‘s Julie Bowen follows Vergara and Cuoco-Sweeting with just $12 million. The next four men on the actors list (Mark Harmon, two more The Big Bang Theory cast members, and Ashton Kutcher) all pulled in $20 million. Meanwhile, only two actresses are pulling in more than $20 million, as Twitter users reminded us.

This is in an age where female leads are becoming increasingly prominent, as the male antihero era is largely behind us—with ensemble casts reigning supreme at the moment. Yet, even within those ensemble casts, women and minority actors are making significantly less than their white, male counterparts. Last season alone, Empire, Fresh Off the Boat, Black-ish, and How to Get Away With Murder all premiered on network TV with minority and/or female leads. The landscape is obviously changing, so why isn’t the pay scale?

As television continues to become a more diverse place, it would be nice to see the studios pay their actors accordingly. While it is unrealistic to call for TV stars’ salaries to rival the pay of film stars, it is not unrealistic to wonder why female and minority actors are making less despite starring in high-rated, money-making series.

Notice how many jobs Vergara and Cuoco-Sweeting took on to earn their spots on the overall top 100 list, including starring in movies alongside their TV work. Vergara has become a brand in her own right with her furniture collection and a clothing line—and that was only enough to get them to number 95 on the list, while Parsons, a white male, sits at number 89. If they were only earning one paycheck, they would both lose their spots on the list, and that is depressing.

The Forbes list is just one more example of how far Hollywood has to go if pay equality is ever going to become a reality. Bravo to Vergara and Cuoco-Sweeting for their hard work, and here’s hoping next year’s list will include a few more women and minorities by their side.

Sabienna Bowman is a freelance writer with a lifelong love for TV, books, and Fox Mulder.