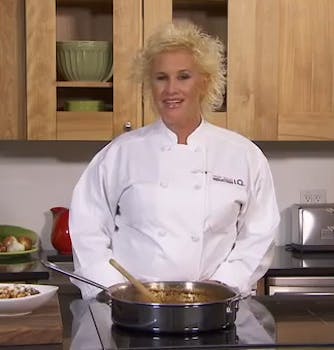 Should the popular, reader-powered Tumblr Food Network Confessions have filtered out an anti-gay submission?

Food Network Confessions, a Tumblr blog which posts anonymous, reader-submitted confessions about the television network and its celebrity chefs, was the focal point for a row about a gay chef this weekend.

Its creator shared a confession submitted by a follower about Food Network’s Anne Burrell, which read: “To be honest, I am upset by the fact that Anne Burrell is a lesbian. I am returning her cookbook to the store and will no longer be watching her programming.” 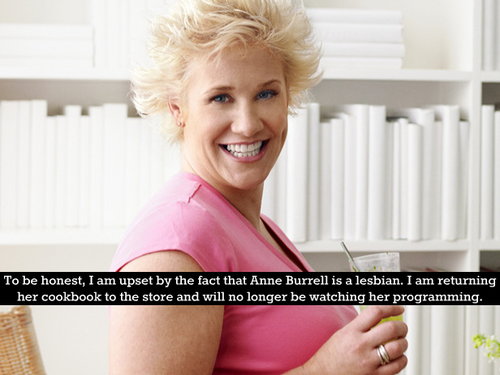 Gracie Rutledge, who runs Food Network Confessions, posts every confession she receives. She doesn’t act as a filter; she simply marries confessions with images and posts them for all to see. When posting the Burrell confession, Rutledge reminded readers that the confessions are not her opinions (something she also told the Daily Dot last month).

The confession received 17 notes, with Tumblr user pacifistic-badass reblogging with the comment: “Whoever made this confession is just stupid and I would love to smack them.”

The furor also played out on Food Network Confessions itself, as Rutledge posted some of the comments sent by followers. One anonymous follower sent a message slamming Rutledge for apparently refusing to take a stance:

“you and the people defending you must be recipients of heterosexual privilege. i’m sorry it’s impossible for you to empathize for a marginalized group just because you’re not one of them. if you saw how many “fag,” “dyke,” “gays should die,” etc. we see on the internet on a daily basis you’d understand. this blog stops being fun and worth following when we see this hate and its owner is more obsessed with its rules than taking a stand for something important.”

Rutledge, who admitted she disagreed with the confession, asked followers to stop suggesting that “all I do is spread hate.” Instead, she asked them to send positive confessions to counter the negative ones.

One follower responded in kind: 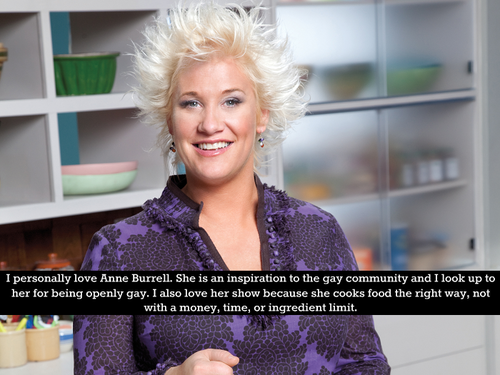 There were a few messages of support as well. However, there were some later confessions critical of Burrell for other reasons.

The reaction to the stormy confession highlights just how effective the blog is in capturing the zeitgeist of Tumblr-savvy Food Network fans. The breadth of confessions shared is compelling. That so many followers defended Rutledge’s aim to share all the confessions highlights their devotion for it.

Update: “When this blog started getting popular and I started to receive many confessions in a day, I had to start making confessions that I really didn’t want to,” Rutledge wrote to the Daily Dot. “But I view my blog as a point of neutrality, where people can come to my ask box and submit their confession no matter what it is. Even if I disagree, I post it. I don’t think it’s fair of me to decide whose opinions matter, and whose don’t.”