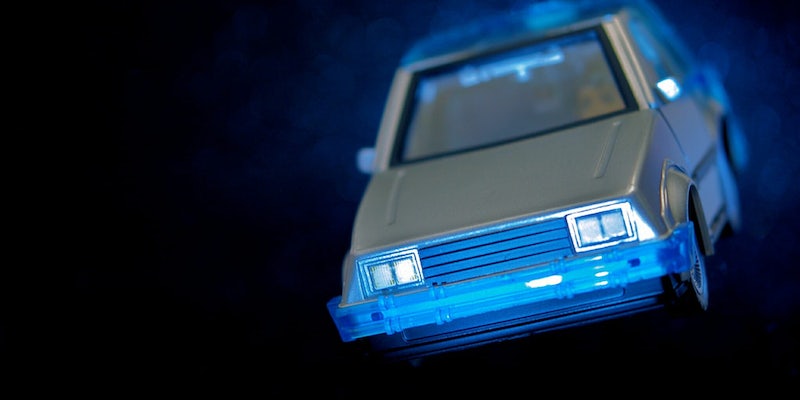 The real reason you still don’t own a flying car

The technology isn't just dangerous and impractical. It's also too late.

“Where are the flying cars?” goes the common refrain. “I was promised flying cars!” They have been a staple in science fiction for more than half a century—a beloved childhood memory from the 1960’s children’s cartoon The Jetsons or even the frightening gritty flying cop cars in the 1982 movie Blade Runner. The 1989 movie Back to the Future Part II predicted that they will be commonplace by 2015, while 1997’s The Fifth Element gives us a little more time: By the year 2263, the skies of New York are packed with multilevel lanes of flying cars whizzing between the city’s skyscrapers.

They might not be the floating Thai food trucks The Fifth Element promised, but flying cars do already exist. The company Terrafugia, founded in 2006, specializes in what they call “personal aviation” and has developed both a functional “flying car” and a “roadable aircraft”—although you will probably have to consult their press releases to fully understand the difference.

It looks intriguing, but their technology only raises more questions—if we have the means, why haven’t flying cars hit the aerial roadways? The basic technology hasn’t been impossible to crack: We have been developing vertical take-off and landing (VTOL) machines for over half a century. Decade after decade, engines get smaller and lighter and cheaper. The problem isn’t one of demand either: Traffic in large cities has been a continuous struggle, with population sizes increasing and millennials preferring to live in metropolitan areas rather than suburbs. The pressing problem of road congestion has bred other technological innovation, such as real-time traffic monitoring and intelligent traffic light management.

So why, in 2015, is the flying car still stuck in the “goofy prototype” phase of its lifecycle? The answer may be more simple than you think: You want it, but in today’s technological era, you might not actually need a flying car.

The lifecycle of technological innovations

In his book The Hacker Crackdown, Bruce Sterling describes the four stages of the lifecycle of a technology. First is the golden vaporware stage, where the technology is merely a fanciful notion. Second is the goofy prototype stage, where the inventors have created something that looks awfully neat and seems to have potential but isn’t at all practical. Third is the cash cow stage, when the technology matures and finds its useful place in the world. Finally, there is technology death: When the idea is replaced by something faster or more effective—as all technological ideas eventually are.

His book is about telephone hacking, so Sterling describes these stages in development of the telephone. He makes the important point that there was a time when people were not sure whether telephones would be widespread or useful. The innovation went through its own “goofy prototype” phase: It was featured at state fairs as a novelty device, but nobody really knew what was for. Most people initially thought it quite creepy and impractical. Who wants to talk to noises made by a machine? And isn’t it a great burden to have to lay down miles and miles of wire for this device, when you could just sent a messenger boy on a bicycle instead?

The telephone eventually overcame these problems, but social and infrastructure concerns are even larger obstacles for the flying car. Futurist Gray Scott, founder of the Serious Wonder website and host of The Futuristic Now podcast, told me that one of the biggest practical problems with the traditional concept of the flying car is the unpredictability of people. Managing multiple levels of “lanes” of airborne traffic would not only require a complete overhaul of “driver’s education” training but would require new levels of attention and skill that are sure to be challenging to today’s motor vehicle drivers. “We do not want texting tweens behind the wheel of a traditional flying car,” Scott observed.

Scott believes that the development of drone technology and self-driving cars are what finally will allow flying cars to emerge from the “goofy prototype” phase, to become a cheap and ubiquitous option for personal travel.

But I think he’s wrong. I believe we will never live in a world where flying cars are commonplace, for one simple reason: They have arrived too late.

When science fiction lets us down

People always like to focus on the predictions of science fiction that eventually came true—from Jules Verne predicting the rocket ship in 1865 to Douglas Adams’s 1978 novel The Hitchhiker’s Guide to the Galaxy giving an eerily accurate description of the Kindle. But science fiction has promised us a lot of things over the ages, and many of them have not materialized.

In Frederic Brown’s 1949 sci-fi novel What Mad Universe, the main character sets out in a spaceship to the moon, and to chart the course, he reaches under the pilot’s seat to get out a copy of the “Astrogator’s Almanac”—in which he looks up the direction and distance to punch into the space ship’s controls. The 1965 novel Dune describes books written in microscopic letters on “Ridulian crystal paper” that is only one molecule thick. And who can forget the infamous automated feeding machine from the 1936 Charlie Chaplin film Modern Times?

OK, maybe the Chaplin film shouldn’t be considered a serious prediction. But anyone knowledgeable about history is aware that there have been more technological predictions throughout the ages that have not come true than ones that have. Earlier this month, the Washington Post published a series of drawings illustrating what French artists in the year 1899 thought the world would be like in the year 2000. Of course, flying cars play a prominent role.

But the series makes other predictions as well, including an orchestra of instruments played by automated mechanical arms and an automated cleaner that has multiple brooms protruding from a central machine. These “failed predictions” of science fiction show an interesting pattern: They never appeared because our culture outgrew the original technology that they were based on.

We never needed mechanical arms to push a broom across the floor, because Hubert Cecil Booth invented the vacuum cleaner in 1901. We never needed mechanical arms to play real musical instruments, because Robert Moog’s synthesizer made people realize that electronics could reproduce any sound. The invention of the digital computer, with incredibly compact data storage, made both Fredric Brown’s “Astrogator’s Almanac” and the Ridulian crystal paper of the Dune universe obsolete before anyone bothered to create them in real life.

In each of these cases, the science-fiction innovations became obsolete before anyone bothered building them, because they were improvements on technology that took a radical turn in a different direction.

I believe we will never live in a world where flying cars are commonplace, for one simple reason: They have arrived too late.

In the next 20 or 30 years, will there be a demand for flying cars? That will depend on whether there is a demand for cars at all. We are moving rapidly into an age of worldwide digital communication. Analysts predict that up to 60 percent of Americans may work from home within the next few years. Businesses regularly use Telepresence and holographic technologies to have meetings across the globe. Even my 78-year-old mother Skypes with her friends in Germany on a regular basis.

Some futurists go so far as to predict that we will be able to project our consciousness into remote robots halfway across the globe by the year 2045. If that prediction comes even close to being true, the much-beloved “flying car” could end up being obsolete before it (proverbially) gets off the ground. Like the charming mechanical arms of the “automated orchestra” imagined by French artists in 1899 or the quaint notion of astronauts using an “Astrogator’s Almanac,” the flying car may end up being a cool enhancement of a technology on the verge of obsolescence.

What the future will hold

Of course, we may not transition to the world of telepresence and consciousness teleportation as quickly as some people predict. If the demand for flying cars lasts long enough, the “goofy prototype” created by Terrafugia may just develop into something more. On the other hand, if people remain resistant to the idea of autonomous self-driving vehicles, flying cars might simply not be a socially acceptable or practically feasible option any time soon.

There are “in-between” possibilities as well. Public transportation might be poised to more easily transition to “drone technology” than individual personal vehicles. Many large cities already struggle with expansion of their subway systems because digging is expensive and structurally dangerous; the Chicago “L” train is elevated above traffic for exactly these reasons. We may not want texting tweens steering individual flying cars, but a self-driving public transit system that could fly above standard automobile traffic would be a city planner’s dream come true.

In the end, it will be our social evolution as much as our technological development that determines whether flying cars become a reality or end up being a curious footnote of fiction, stuck between mechanical orchestras and Charlie Chaplin’s automated feeding machine on the bookshelves of history.

Greg Stevens writes about science and social issues for Second Nexus. His writing has appeared in Salon, the Huffington Post and Instinct magazine.