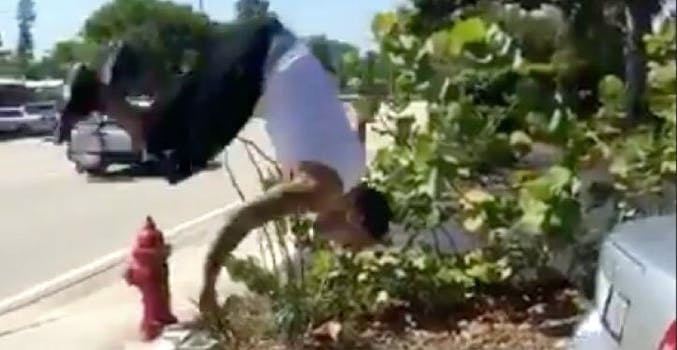 Florida man has brush with death while backflipping off a car

“My boy almost lost his life smh,” tweeted Florida resident “Tommy from Broward” earlier this week. And he’s not wrong: His boy did a backflip off of a parked car, and it ended up mere inches from disaster.

It wasn’t because he didn’t stick the flip—he did, barely—but because he almost stumbled off the curb and directly into traffic. He barely avoided a car speeding by.

If he hadn’t caught himself with his hands, this would be a very different video. He almost went from Twitter to LiveLeak, which has a much looser policy toward footage of death.

The video, taken by Tommy’s friend @regaljuice, went epidemically viral on Twitter, with tens of thousands of likes and retweets. And, of course, everyone was ready with jokes and reaction GIFs:

Grim reaper pulled up on that boy like "you got one more time, keep playing with me fam"

Death bout to roll up like "My man, do something foolish one more time" pic.twitter.com/socDeuvSSv

The best, though, was from Tommy himself, who jokingly called his very lucky friend “Lil Flip” (like the rapper).

The internet is used to Florida residents doing dumb things, but it somehow never gets old. At least this one didn’t end in tragedy.