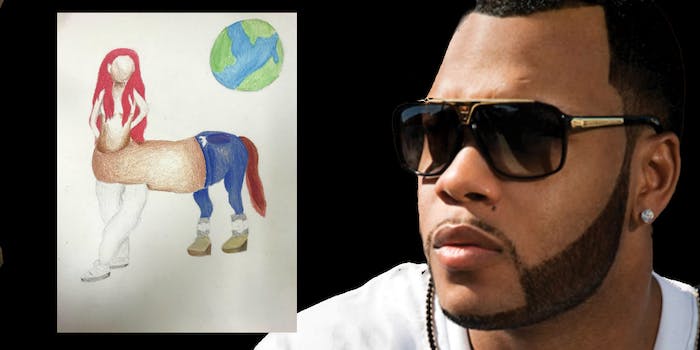 T-Pain weighs in on the ‘Low’ truther theory

Finally we know why that shawty was wearing two pairs of pants.

Flo Rida’s 2007 hit “Low” was the rapper’s first single. It was co-written by T-Pain, hit number one on the Billboard Hot 100, and was featured in the movie Step Up 2: The Streets. Point being, we’ve probably all heard it a few million times.

But take one more listen.

In the song, the “shawty” seems to be wearing two pairs of shoes and two pairs of pants. First, she’s wearing “apple-bottom jeans” and “boots with the fur,” then she’s in “baggy sweatpants” and “Reeboks with the straps.”

This leads to only one possible conclusion: She’s a centaur.

The girl Flo Rida sings about in Low was wearing apple bottom jeans, boots with the fur, baggy sweatpants, AND reeboks with the straps all at the same time so we must conclude that she was, in fact, a centaur. In this essay I will

To be fair, @caroline_oreo wasn’t the first one to point this out. A user named @forclosers said the woman in the song was wearing either double pants and shoes—or she had four legs.

But @caroline_oreo was the first one who proposed the centaur theory that neatly explained everything. At first glance, it seems undeniable. People even started making fan art, of both the cute variety…

…and the more risqué.

Of course, this is Twitter, so alternate theories started being thrown around.

Huh… I’ve always thought of this as two performers taking turns as the story’s narrator and not as two separate characters talking about the same girl.

Is it possible that Mr Rida simply referred to her footwear in general terms initially as the 'boots with the fur' then again specifically by brand and styling? Not sure a Centaur has the opposable grip to 'work that pole'

And naturally, the whole how dogs/horses/centaurs wear pants debate got drug up.

These are the only options. pic.twitter.com/zUQAmX3aOO

Luckily, T-Pain himself jumped in before things got too out of control. He confirmed that, yes, the two-narrator theory was correct.

You would think that would be the end of the debate, but people were not about to let Mr. Pain off so easily.

I think that distinction is unclear in the song. Maybe you should have said, “a second shawty had baggy sweatpants…” otherwise, it’s a kerfuffle. The third one in a row concerning your lyrics. Tighten up sir!

Why does TPain hate Centaurs.

Some days you just can’t win.