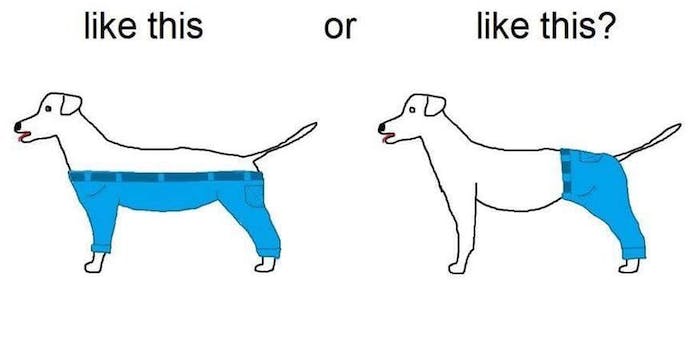 Why is the Internet reliving this old debate about dogs wearing pants?

Woof if you know the answer.

It’s the dress all over again. Or is it?

Yet another unanswerable question has taken the Internet by storm. If dogs wore pants, how would they wear them?

Maxim editor Jared Keller posted the question to his Twitter Monday night after encountering the amusing picture on Facebook. The tweet has since racked up over 22,000 RTs and 24,000 likes.

Keller also initiated a poll, which revealed a very strong majority in favor of the two-legged option.

While Keller did not initially credit his source, his article over at Maxim traces the image to the Facebook post. He even interviewed a moderator named Norbert, who said, “I created it last night at about 2 or 3 am (it’s 4:30 pm now my time). I saw some dogs wearing pants, and I thought about how they don’t really have arms so their pants should technically go on every leg. I just tried both versions.”

Keller went on to post a screengrab that allegedly proved the veracity of Norbert’s intellectual property claim.

The question also made its way over to the “reverse animal rescue” subreddit, where the top commenter posted this iron-clad argument:

But we traced the first hints of this discussion to a November Tumblr post.

The YikYak screenshots were written up by BuzzFeed and several other websites at the time. So it looks like the conundrum has had its moment before. And given the similarity of the art—to say nothing of the exact same wording in both iterations—it seems “Norbert” is a meme plagiarist at best.

Meanwhile, a quick Instagram search of #dogswearingpants reveals the question was answered at least three weeks ago by this smart dresser.

But we do have to thank Keller. Even if the answer is painfully obvious and no real disagreement exists, the brief renewal of this viral non-argument reminded the world of this beautiful GIF.