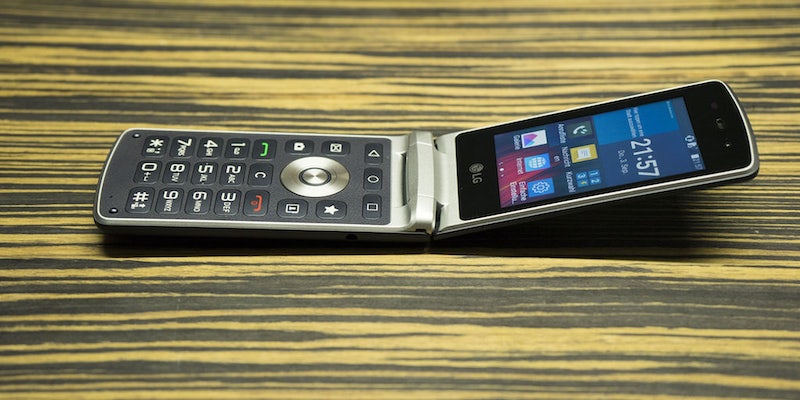 There are plenty of reasons to own a flip phone in 2015—and it's not just about nostalgia.

A new single from Adele, the moody 25-year-old British chanteuse who sings what the world is feeling, was bound to break the Internet. But one particular facet of the music video for “Hello,” directed by Canadian enfant terrible Xavier Dolan in rain-drenched sepia, stuck out to Twitter users: Adele’s flip phone. User @toddlerrex tweeted: “A flip phone #Adele? Explains the lack of tweets…,” while @feedlimmy quipped: “I mean, really. A Motorola flip phone, Adele? Was this video shot when you were 19?”

This isn’t the first time a celebrity has been roasted for using a flip phone in public. Last November, Vogue editor and beloved ice queen Anna Wintour was spotted at the U.S. Open peering out from behind her trademark shades into the light of her archaic AT&T Z222 GoPhone. In the New York Times, Michael Musto declared it “retro chic,” after celebrities like Scarlett Johansson and Rihanna were likewise spotted with outdated devices.

It might be so retro it’s “nowtro”—to quote Christopher Guest’s great A Mighty Wind—but there are plenty of reasons that someone might want to sport 2001’s favorite device that have nothing to do with its “vintage” status. In addition to its low cost, the flip phone offers an allure of simplicity and privacy. Instead of a cell phone that doubles as a computer, personal assistant, and Walkman, single-function devices meant simply to do the thing they’re designed for aren’t just a blast from the past. In an increasingly wired world, they’re practically zen.

While the philosophy of the flip phone might be appealing to folks like Anna Wintour or venture capitalist Warren Buffett and Indianapolis Colts quarterback Andrew Luck—who Time dubbed “evangelists” for the device—many consumers simply don’t have another option. Wintour’s burner phone would only cost around $15—a far cry from the iPhone 6S, whose hefty price tag is around a month’s rent in Chicago or Los Angeles (if you have roommates). This is why flip phones remain popular among popular among seniors and low-income workers—with programs like Lifeline offering free government subsidized phones for those who qualify.

And that’s not to mention the oversized phone plans necessary to pay for an iPhone month to month. With insurance and a payment plan for the device, I pay $115.19 a month to make calls on what’s basically a juiced-up iPod that recognizes my fingerprint. In contrast, Republic Wireless offers unlimited talk and text plans for just $19.99, nearly $100 less than what I pay. Who looks crazier—me or Anna Wintour?

Single-function devices meant simply to do the thing they’re designed for aren’t just a blast from the past. In an increasingly wired world, they’re practically zen.

While multi-millionaires like Rihanna and ScarJo (the highest-paid actress in Hollywood) likely don’t need to lower their monthly bills, they’ve also had nude photos of themselves leaked in high-profile hacking incidents in the past few years. For those concerned about privacy, flip phones offer an easy solution: Don’t go off the grid entirely, just go low-tech. It’s hard to hack your apps if your phone doesn’t have apps—or even a camera installed.

But as Rebecca Abrahms and Dr. Stephen Bryen point out in the Huffington Post, the promise of privacy offered by switching to a flip phone might be illusory. “Flip phones are certainly not ‘safer’ than smartphones,” Abrahms and Bryen write. “For example, flip phones have GPS chips and your location can be tracked on a flip just as well as you can be tracked on a smartphone. And SMS, email, and pictures can be easily intercepted by government organizations as well as by hackers. There is even pretty good spyware that can be installed on some flip phones.”

While there’s no way to insulate yourself entirely from hackers, getting rid of the bells and whistles of social media on your phone certainly makes less noise for those hoping to protect themselves from potential breaches—or just live a quieter technological existence. In a defense of the flip phone for the Billfold, Matt Powers argues that being a flip phone user is motivated by “a desire not to be reachable in all manners of communication, at all hours of the day, all days of the week.” He writes, “If something is important enough to elicit my attention on a Tuesday evening or Sunday afternoon, a call or text will be more than sufficient.”

But it’s not just a matter of being unreachable—it’s about simplifying the kinds of technology you use. The smartphone era is indicative of a time in which we ask our devices to do nearly anything we would wish of them at any given moment. Your video game console is no longer a little box that lets you play Pong but an adroit media hub with increasingly diverse options; you can watch YouTube, surf the Internet, or see what’s on Netflix—all while your game of Assassin’s Creed is paused.

The one-stop shop nature of modern technology makes it more cosmetically convenient, but also means we increasingly rely on those devices to do everything for us—because, well, they can do everything for us. Estimates suggest that users spend nearly 1200 minutes on Facebook each month; while Pew Research indicates that it’s primarily motivated by FOMO—the fear of missing out on conversations or social activities—it’s also because the site has integrated email and chat functions in a way that drives dependency. It wants not to be the center of your social media life, but your entire social media life.

For those concerned about privacy, flip phones offer an easy solution: Don’t go off the grid entirely, just go low-tech.

The real question shouldn’t be how often users are on Facebook each day but how often they leave at all, and flip phones confront that issue by hitting social media use where it hurts most: our cell phones. When Facebook was first founded in 2004, most users were logging into the site through their computers, but since then, mobile use has largely driven the social media revolution. Ninety-four percent of teens with a cellphone describe themselves as frequent social media and Web users, and 24 percent say they’re online “almost constantly.”

While unplugging with your flip phone might mean you’ll miss out on an instant notification about what everyone’s doing on Friday night, being in the dark has its perks. Instead of finding out from a Facebook event, you can always just dial up your friends and ask what they’re doing this weekend. It might seem pretty drab to call someone when you can just Snapchat, Facebook, or tweet all your closest friends, but just because we have 40 ways of getting in touch doesn’t mean we’re actually communicating.

Adele might not make flip phones cool again—but trust me: Simplicity never goes out of style.