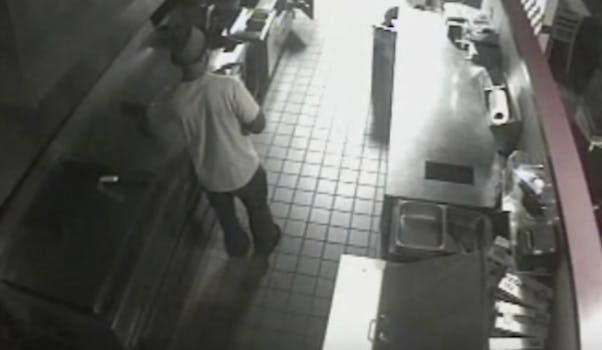 Dude breaks into Five Guys just to cook himself a burger

The crime of the century.

Ever woken up in the middle of the night with a severe hunger pain? And as you tried your best to will yourself back to sleep, a growling stomach prevented you from getting anything that resembles sleep? Defeated, you stared at the ceiling, waiting for the sun to rise so you could finally give your body the nutrients you denied it during daylight hours?

If so, then the guy in this video can’t relate. Because he snuck into a Five Guys late at night to make himself the burger he deserved. Peep the way he effortlessly walks around like he owns the joint. Observe the way he’s not even worried about police catching and arresting him for having the audacity to prepare his own #3 with cheese well past closing time.

Is he an ex-employee who casually sneaks into his old workplace to feed himself whenever he feels like it? Was he dared by his friends? Maybe he was just high af and had no idea wtf he was doing. Then again, it really looks like he knew exactly what he was doing.

In any event, this brave soul is a hero and represents true American values. He knew what he wanted and he took it. Hamburglar would be so proud.