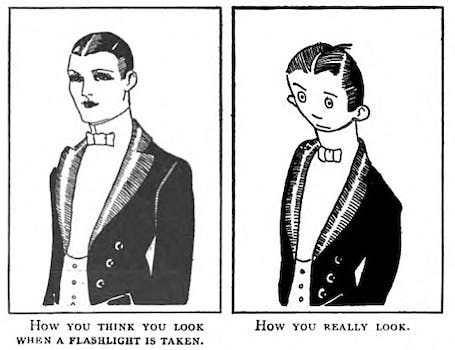 This comic from the 1920s looks just like a modern meme

We've been doing this meme for a while, huh?

There are no original ideas anymore. And, apparently, no original memes. A Twitter user who goes by the handle @YoRHaw shared an image from a 1921 comic strip over the weekend that is eerily similar to memes that compare two images today.

this comic strip from 1921 is really relatable to this day pic.twitter.com/DXCpl923Iy

It’s the “What you think you look like vs. what you actually look like” meme! The new “If you don’t love me at my worst” meme also resembles the format of this old comic.

The joke in the comic works for an occasion when you’re having your photo taken, like for a driver’s license photo:

Or: Driver's license photos, in a nutshell. https://t.co/bQXLGxKIo6

So where did this image come from? Its origin is a satirical magazine called Judge, which ran until 1947. You can see the full issue of the magazine in an archive here.

https://t.co/dZZwOXhN0j here you are :D

The comic had some people asking if this was the first meme.

kneel before the first meme in history https://t.co/VRJUnD3YI2

But there were probably “memes” or jokes about our perceived attractiveness long before this comic was published. Humans have always been vain.