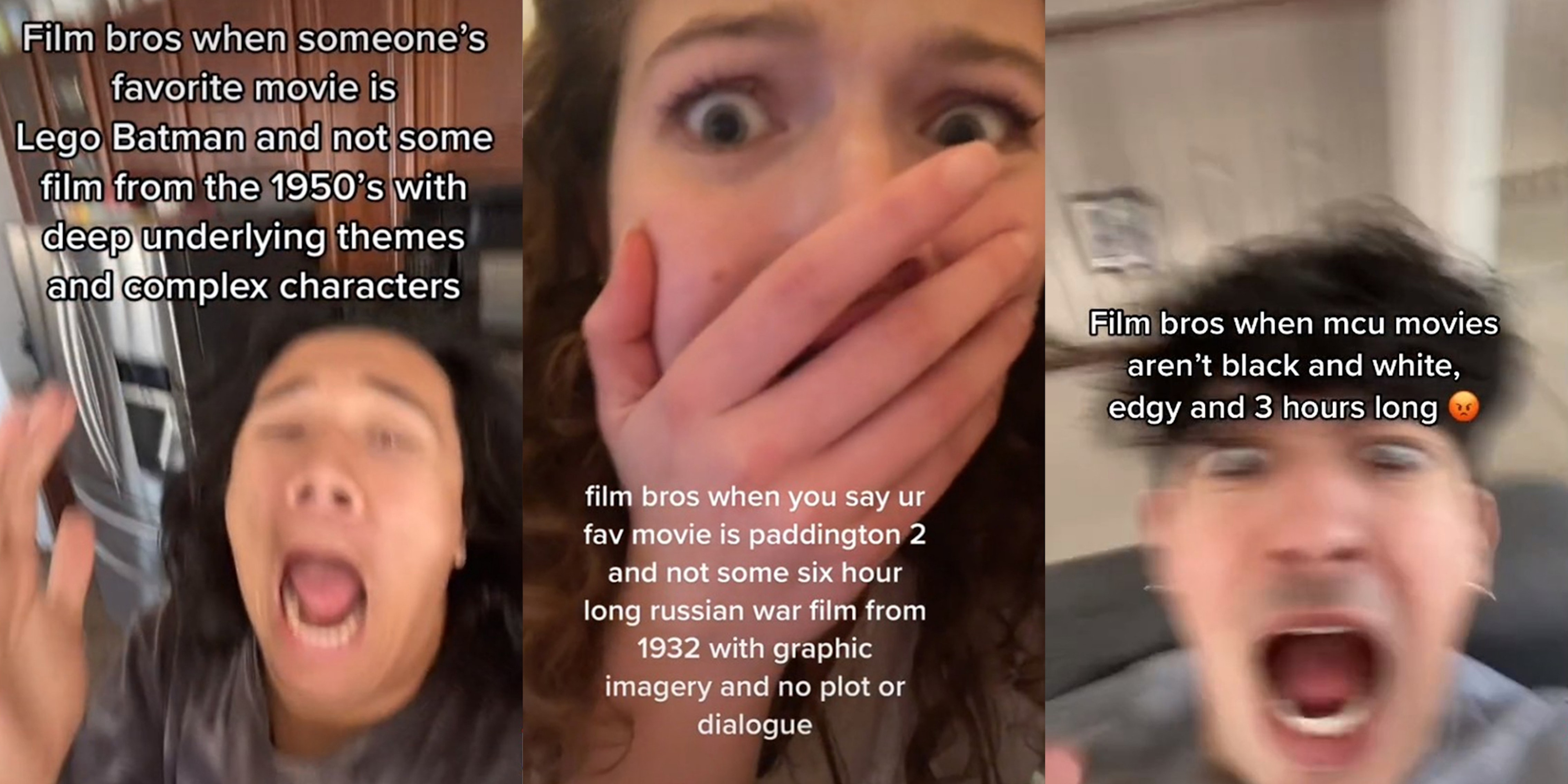 We all recognize the “film bro” stereotype: An obnoxious guy obsessed with a male-dominated cinematic canon, idolizing Scorsese and Tarantino. But like so many stereotypes, this image is neither constructive nor particularly accurate. Originally inspired by the foibles of unpleasant, blinkered snobs, the film bro trope is now being reshaped… by a different group of unpleasant, blinkered snobs.

Over on TikTok, you’ll find dozens of viral film bro takedowns, skewering various facets of the stereotype: Loving Taxi Driver and Christopher Nolan, ignoring films by and for women, and worshipping at the altar of white guys shouting. This week, one particular subgenre spread to Twitter, seeing TikTokers deride imaginary film bros for enjoying art cinema instead of mainstream entertainment like Lego Batman.

Popular targets include black-and-white movies, anything European, and films with dark or political themes. Attracting hundreds of thousands of views, these TikToks clearly resonate with a lot of people on the app. However, they also seem like a classic example of people inventing a guy to get mad at.

Sure, there are always clashes between people with differing tastes in art, but there’s not exactly an epidemic of European cinephiles expressing shock that Marvel and Paddington 2 are popular. Superhero franchises and Disney cartoons dominate American culture, making these TikToks a Gen-Z twist on conservatives complaining about the “elitism” of people with no meaningful power.

While there’s some truth to the classic Scorsese/Tarantino/Fight Club stereotype, the film bro concept has been critiqued from many angles. First off, certain movies shouldn’t be dismissed just because they’re enjoyed by a specific type of annoying white guy. Appreciating Taxi Driver is not a “red flag,” and plenty of women and people of color enjoy Hitchcock and Fincher. Secondly, while there is a manufactured rivalry between Scorsese and Marvel fans, most film buffs enjoy a wide variety of genres—just one of many reasons why these TikToks sparked criticism when they arrived on Film Twitter:

Instead of just saying, “Hey, I’d rather watch Fast and Furious than Tarkovsky,” this meme plays into a growing mood of anti-intellectualism in pop culture. It mocks the idea of enjoying anything experimental, complex, old, or foreign. In turn, this solidifies the idea that certain films are only “for” annoying white guys and/or intellectual snobs, discouraging people from exploring the diversity of non-Hollywood cinema.

Film bro discourse has now come full circle. Rather than critiquing the mindset behind celebrating a shallow pool of white, male directors, these viral takedowns act as a bizarre defense of the sexist, capitalist Hollywood studio system. They present an imaginary scenario where people are scorned for enjoying the MCU, unlike the reality where indie movies are crushed by a monopolistic flood of studio blockbusters.

On an individual level, liking Disney cartoons and hating vintage dramas is a harmless matter of personal taste. But in the aggregate, the spread of anti-intellectual sentiment signals something more insidious. It ties into Marvel fans demanding an Oscar for a fun-but-unremarkable Spider-Man movie, and Disney and Netflix marketing themselves as champions of diversity while actively suppressing work by marginalized creators.

Backlash against experimental art is a documented symptom of fascism, and it’s depressing to see people reject films specifically because they’re foreign, political, or adult. Weird and challenging movies are not your enemy, and neither are film buffs—even if some of them can be a little annoying.