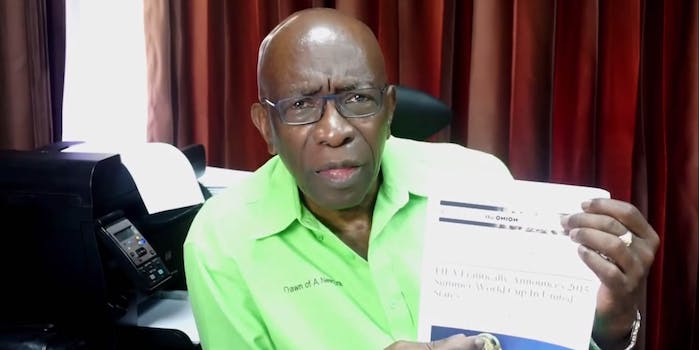 He fell for a parody news article making fun of his own corruption case. Ouch.

Just when you thought the FIFA scandal couldn’t get any more ridiculous, the soccer governing body’s former vice president has been caught trying to defend himself using an article from the satirical news site The Onion.

Jack Warner, who is also a member of parliament in Trinidad and Tobago, was one of several FIFA officials arrested last week on corruption charges. According to him, the U.S. Justice Department’s investigation “stemmed from the failed U.S. bid to host the World Cup.”

In an online video proclaiming his innocence, Warner accused the U.S. of being bitter that it lost its 2022 World Cup bid to Qatar. Then, incredibly, he cited an Onion article as evidence that FIFA was not corrupt or biased against the U.S.

The original video has since been deleted, but for obvious reasons it already made its way to YouTube.

“At press time, the U.S. national team was leading defending champions Germany in the World Cup’s opening match after being awarded 12 penalties in the game’s first three minutes.”

So yeah, not a real news story.

Jack Warner’s lawyers have an uphill battle ahead of them. Not only did Warner try to defend himself using a fictitious parody article making fun of his own case, but he seems to think he should have been given “advance notice” of his arrest.

Either Warner has a surprisingly naive understanding of how the legal system works, or he’s under the impression that law-enforcement agencies should give him a chance to avoid criminal charges without going to court. Either way, it’s not the best attitude for someone implicated in a massive international corruption case.