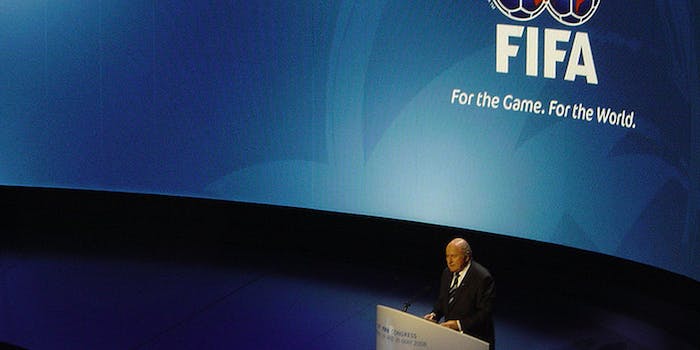 5 key things about the FIFA arrests in Switzerland

The U.S. Department of Justice has gone after FIFA. Here's why this is a big deal.

With all the makings and scenes of a fantastic movie, police staged an early morning siege at a five-star hotel in Zurich, Switzerland, on Wednesday. They arrested seven high-ranking FIFA officials as the U.S. Department of Justice charged them and seven others with racketeering, wire fraud, and money laundering conspiracy and said they plan to extradite them to the U.S.

The scenes that exploded all over the Internet in this country late Tuesday night were some kind of combination of a James Bond flick and a European version of The Untouchables—complete with Baur Au Lac hotel workers holding up white sheets so those who were arrested could be led to their waiting police vehicles with some degree of privacy and decorum.

Despite our inability to see their faces, the arrests sent shockwaves through the international soccer community, and showed that this country is tired of hearing about the many stories and allegations of corruption inside FIFA, the world’s largest soccer-governing body. Here are five things to know from Wednesday’s arrests, and what it might mean for the future of international fútbol.

Though Blatter wasn’t arrested nor do there seem to be plans to do so, it seems readily apparent that the organization he’s run since 1998 was infiltrated by the idea that paying somebody huge sums of money would be good for that donor’s country of origin. “In short, these individuals, through these organizations, engaged in bribery to decide who would televise games, where the games would be held, and who would run the organization overseeing organized soccer worldwide,” U.S. attorney Loretta Lynch told reporters. The Federal Bureau of Investigation also raided the Miami offices of CONCACAF—the federation that handles international soccer in North and Central America and the Caribbean—on Wednesday morning.

2) Why did the Swiss, who have opened their own investigation into FIFA, help the Americans in detaining these individuals?

The New York Times explains: “Switzerland’s treaty with the United States is unusual in that it gives Swiss authorities the power to refuse extradition for tax crimes, but on matters of general criminal law, the Swiss have agreed to turn people over for prosecution in American courts.” So, if those arrested FIFA officials were hoping to avoid a trip to this country, that seems unlikely. And now the idea that the top executives at FIFA were untouchable has vanished.

US really earning its spurs as world's policeman today after utter failure by any other authority to get FIFA's rampant corruption in check.

3) A few of these indictments hit close to home, as Jeffrey Webb and Jack Warner—the current and former presidents of CONCACAF—have been charged.

As the DOJ wrote in its press release, “the defendants also include U.S. and South American sports marketing executives who are alleged to have systematically paid and agreed to pay well over $150 million in bribes and kickbacks to obtain lucrative media and marketing rights to international soccer tournaments.” The DOJ also announced that Charles Blazer, a longtime former general secretary of CONCACAF and the former U.S. representative of the FIFA executive committee, has pleaded guilty in federal court.

4) The reaction has been interesting.

The South African Football Association strongly disagreed with Lynch’s assertion that the 2010 World Cup that had been awarded to South Africa was based, in part, on bribes and invoked the name of Nelson Mandela in explaining that the winning bid had not been tainted by any kind of corruption. Russia, which will host the 2018 World Cup, slammed the U.S., saying this was “another case of illegal extraterritorial application of U.S. laws” and “we hope this will in no way be used to tarnish the international football organization in general and its decisions.” Meanwhile, the process to elect Blatter to a fifth term as FIFA’s president is scheduled for Friday, and FIFA says that the election will continue. Said Walter De Gregorio, FIFA’s director of communications: “This, for FIFA, is good. It’s not good for our image, it’s not good for our reputation, but it’s good for cleaning up the game.” As for the Internal Revenue Service‘s reaction? Here’s IRS official Richard Weber.

5. The U.S. might not be done putting FIFA officials in handcuffs, as there were 25 unnamed people in the indictment.

“This is the beginning of our effort, not the end,” Kelly T. Currie, acting United States attorney for the Eastern District of New York, said, via the Times. “…We are looking into individuals and entities in a variety of countries.” Those who are facing charges could face up to 20 years in prison if convicted of the racketeering charges.