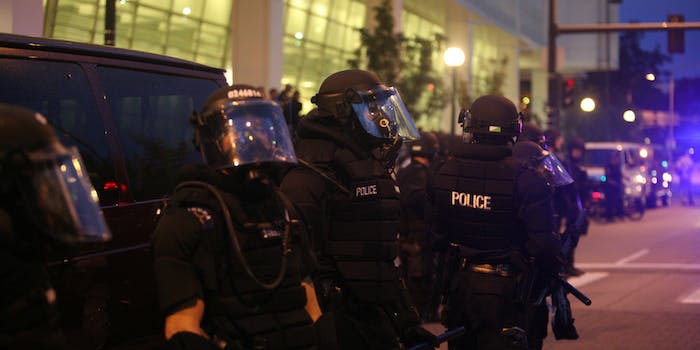 It’s sad to say, but 2014 was nothing if not a big year for police brutality.

Michael Brown. Eric Garner. Tamir Rice. These names have now been painfully etched into our memories, reminding us that the days of Rodney King and Selma are not far behind us and that the same prejudicial attitudes which begot so much violence in the past are alive and well in the present. So far, 2015 hasn’t been much better, and the recent killing of an unnamed homeless man on L.A.’s Skid Row is shameful proof of this.

These cases set a depressing precedent wherein black citizens of this country have to actively work to protect themselves from the police. As new evidence from the Department of Justice’s probe into the Ferguson, Mo., case demonstrates, we have to do a better job preventing police abuse and brutality. This cannot be a backburner issue: It must become a chief priority for every American with a conscience. Dispelling America’s ingrained racism is no easy task, but by taking a multifaceted, systematic approach to this problem, it is possible.

Here are five changes America needs to make to help leave our terrible, horrible, no good, very bad year in the past.

While grand juries are not intrinsically related to police departments, our current system has become so entrenched in its relationship to law enforcement that the entire mechanism might as well be an outgrowth of the police. As prosecutors and district attorneys work with law enforcement to help make their cases, it can be hard for them to deal with the the police objectively. That’s why New York Chief Judge Jonathan Lippmann has proposed “requiring an active, physical judicial presence in grand-jury proceedings investigating potential homicide or serious assault arising out of a police-citizen encounter,” while others have suggested appointing special prosecutors for such cases.

However, that may not be enough to ensure impartiality: As the Christian Science Monitor‘s Harry Brunius explains, “jurors have a built-in bias to trust the word of police officers, who know the system and understand the law.” Brunius continues, “Police officers are given the power to kill in society, and they are often given the benefit of the doubt in cases in which they may face life-threatening danger. Many often have qualified immunity as well, part of a deeply held social compact that recognizes the pressures of the job.”

Because of these biases toward trusting police, grand juries rarely indict cops who kill, and in police brutality cases, the solution may be, thus, to eliminate grand juries from the process altogether. But no matter the solution, police departments need to know that if they slip up, the judicial system is not going to be there to cover for them.

If you’ve ever felt like somebody’s watching you, you may be right. It’s well-known by this point that the police frequently monitor black neighborhoods, and the Atlantic‘s James Forman Jr. describes it as a “full-fledged war with residents.” He writes, “[Police] often beat up people under arrest, steal from suspects, smash up homes while serving warrants, and use the results of surveillance to turn lovers or family members against one another.”

Sociologist Alice Goffman spent six years investigating the police’s relationship to residents of a poor, urban Philadelphia neighborhood and found that law enforcement tactics were tearing the community apart: “The sheer scope of policing and imprisonment … is transforming community life in ways that are deep and enduring, not only for the young men who are their targets but for their family members, partners, and neighbors.”

This is an area where where we have to flip the script, surveilling the police instead of giving them the sole power to spy on and abuse citizens. Although we, in theory, trust the police to keep a watchful eye over us, the truth is that the events of the last year have emphasized time and again why we need to do a better job of keeping an eye on them.

In an article from this February, the Daily Dot’s Ben Branstetter proposed the widespread consumer adoption of dashboard cameras, which come equipped in certain police vehicles: “In the world of law enforcement, dashcams have played an integral role in police activity since their widespread adoption in the 1990s, usually as evidence in roadside stops or use-of-force claims.” But while dashcams may be routinely used to check in on more mundane police tasks, their greatest benefit could be their potential to record more violent altercations.

But dashcams have yet to be universally adopted by the American police force. “In its last review of the program from 2007, the Justice Department found that 61 percent of police departments use the cameras,” Branstetter notes. “As has often been pointed out since the incident, the lack of dashcam footage in the altercation that took Michael Brown’s life last August largely caused the confusion of circumstances the grand jury was presented with before deciding not to indict Darren Wilson. Despite six eyewitnesses, the official record of what happened the night Brown was shot remains rather unclear, relying as it does on the testimony of one man.”

Sixty-one percent is not sufficient when it comes to preventing police brutality. While Branstetter noted that police departments are reticent to install dashcams because of the perceived expense, there appears to be a double standard here; given the amount of money that has been poured into furnishing the police with riot gear, it shouldn’t be hard to put some funding into technology that will show us exactly what the police think they need all that firepower for anyway.

Sensitivity training has already been offered at many police departments around the country, including in Ferguson following the death of Michael Brown; however, as a recent Daily Show segment pointed out, not all police sensitivity programs are created equal. And as Ben Gee argued in the Spectator, departments may have an uphill battle when it comes to change on the issue. In a December article, Gee detailed professor Phillip Atiba Goff on the issue of “masculinity threat,” which Gee called the “real killer in Ferguson.”

Masculinity threat occurs when a male feels his manhood is threatened by another individual, which then leads to uncharacteristically aggressive behavior. Goff argued that the common factor in shootings like the Trayvon Martin and Michael Brown cases is the insidious workings of masculinity threat, which leads to unnecessary escalation and eventual tragedy. Black men are perceived as “hyper-macho,” he said, and this often triggers masculinity threat and irrational aggression from both the officer and noncompliant individual. In this way, an entirely non-racist, tolerant officer can be very vulnerable to participating in a shooting as things begin to spiral out of control.

Despite these psychological obstacles, there is an increased push for better federal sensitivity training—which could become commonplace in American police departments. The Congressional Black Caucus is currently lobbying President Obama to implement mandatory sensitivity training for police officers on a nationwide scale. As Rep. Lacy Clay (D-Mo.) put it, the push is to make sure “all officers in the department have completed diversity training as it relates to minorities, the disabled, the mentally ill persons and new immigrants whom they are sworn to protect and serve.” When you think about it, that isn’t really asking much.

Of course, every community is different and has their own needs when it comes police sensitivity, but the important step here is in making sure that sensitivity training is not merely something that is not only offered but required.

“In general, we understand that public servants have to be held accountable and that it’s best when it comes from an outside, independent force,” writes Slate’s Jamelle Bouie. “It’s why politicians face an electorate, why Congress can investigate the executive branch, and why bureaucrats—at every level—are audited. It’s the whole reason there is a fierce public battle over the merits of greater teacher accountability.”

And yet, in terms of civilian oversight, police departments are different from all the other systems Bouie outlines. He writes, “When it comes to police departments, however, this goes out the window.” And it’s true. Our relationship to the police, the very people who we entrust with our lives, remains frustratingly hands-off. We can advocate for sensitivity training and better surveillance, but where is our actual power in the process?

It’s not untenable that citizens be given some of this decision-making ability, and that’s why organizations like the Center for Police Equity at the University of California, Los Angeles have started to partner with police departments to end the violence. According to Al-Jazeera America’s Rinku Sen, “the CPE works with police departments across the country to research patterns and causes of excessive use of force and to come up with evidence-based remedies.” Sen writes, “A two-and-a-half-year study of the Las Vegas Police Department included a survey of 2,200 officers and a review of the department’s history of civilian complaints and use of force incidents. The study found some negative feelings toward blacks among some officers, but it also found that officers who felt well treated by the department used less force, as did those whose identities as cops were very important to them.”

While many of these revelations are old news given the recent Department of Justice report on Ferguson, the point is that police and civilians worked together to bring them to light; these types of civilian review boards are springing up all over the country and will be a crucial tool to ensuring greater transparency in our law enforcement.

This is point is related to the last four entries on this list, but accountability encompasses more than grand jury reform, technology, deeper sensitivity, and community involvement; it’s about instilling a wider culture of change across police enforcement. Some of that change simply comes down to crunching the numbers: Most of the statistics about police shootings are currently unavailable, and it’s important that police departments are upfront about their internal data. Determining these exact figures is essential to stopping police brutality simply because it’s hard to fix the problem unless you are clear about its scope.

This lack of transparency is likely due to a reported “code of silence” among police departments, but there’s no doubt that America’s law enforcement do have the ability to turn their practices of secrecy around. For instance, news this week out of Pittsburgh has provided evidence that internal reform is possible. As the Pittsburgh Post-Gazette’s Robert Zullo explains:

When Pittsburgh Police Chief Cameron McLay was hired in September, he had two big tasks: rebuild a fraying relationship between the bureau and heavily policed communities and restore his officers’ flagging morale. Both those goals were advanced Tuesday at a promotion ceremony that also included an announcement that the bureau will add a new Office of Professional Standards … charged with reviewing training and ethical standards, developing policies, accountability and internal auditing systems and “catching shortfalls before they become crisis problems,” Chief McLay said.

The types of systems that McLay intends to implement should be mandated at a federal level. But until that day comes, police departments around the country must begin to take similar steps to foster a sense of accountability. No department wants a police brutality case on their hands, but this means that every police department has to begin taking steps from within to prevent just that. As Bouie puts it, “without a change in the culture of policing—without a serious commitment to cooperation and transparency—we’re left in the same spot: with watchers who aren’t actually watched.”

And that must change. Once you sign up to do a job where people’s lives are literally in your hands, then you also have to be held to the highest standards of accountability.