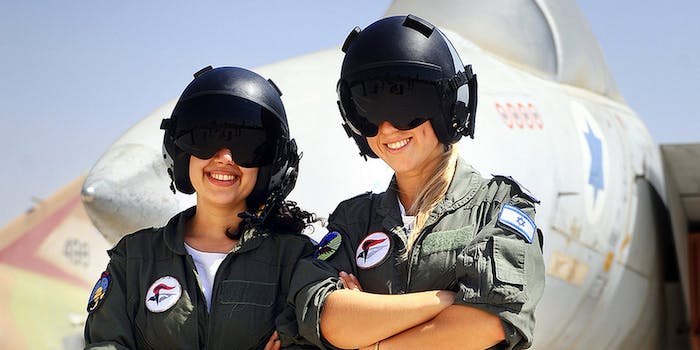 The women were apparently new recruits at a base in the south of Israel. One depicted women exposing their underwear and backsides, according to the Associated Press, while another showed five women wearing only helmets and minimal combat gear.

The women’s faces were blurred, though that did not stop the military from sanctioning them.

“The commanding officers disciplined the soldiers as they saw fitting” over the “unbecoming behavior,” the military said. No details about the women’s identities or the disciplinary measures were forthcoming, though soldiers at the base were lectured against posting such images.

It’s the latest in a string of occasions in which soldiers have found themselves in trouble over their actions on the Internet.

The man behind the @IDFspokesperson Twitter account, one of the military’s main ways of communicating with the public, was apparently found wearing blackface and mocking President Barack Obama in a Facebook photo.

A number of soldiers also arranged their bodies to spell out a message attacking Prime Minister Benjamin Netanyahu for opting not to send ground troops into Palestinian territories during last November’s conflict.

After a male soldier was shown in a 2010 YouTube video “dancing suggestively around a blindfolded Palestinian woman,” the military banned soldiers from using social networks while on base. The AP noted it was unclear if that ban is still in place.