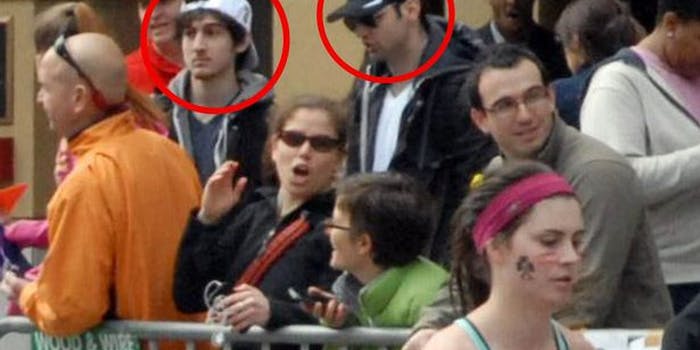 The wild speculation in the wake of the Boston bombings played in a role in the FBI's decision to release the photos of the suspects.

As more details emerge about the investigation that led to the killing and capture of the two Boston Bombing suspects, it’s becoming clear that a social media lynch mob significantly complicated the process.

On Sunday, the Washington Post published new inside details about the case, including how the wild accusations and amateur sleuthing of Reddit users played a role in the FBI’s decision to publicly release photos of Tamerlan and Dzhokhar Tsarnaev.

“In addition to being almost universally wrong, the theories developed via social media complicated the official investigation, according to law enforcement officials,” the Post reports. “Those officials said Saturday that the decision on Thursday to release photos of the two men in baseball caps was meant in part to limit the damage being done to people who were wrongly being targeted as suspects in the news media and on the Internet.”

The damage they refer to includes posting countless photos to the now defunct r/findbostonbombers/ subreddit, where all it seemed to take was a partially concealed face or a duffle bag to turn you into a potential bomber. Reddit was not the only community taking part in the manhunt, with 4Chan also getting in on the action. This online speculation eventually made the jump to mainstream media outlets.

In the aftermath of Dzhokhar Tsarnaev’s arrest and the death of his brother, it’s becoming increasingly clear just how complicated the investigation was made by social media. Not only did the misinformation provided by social networks provide countless false leads, it also created a public backlash that threatened to compromise law enforcement’s authority.

As the Post reports, investigators were afraid of the Tsarnaevs’ photos coming out through social media or reckless mainstream media reportage would create sympathy for the suspects following the public smearing of other innocent bystanders earlier in the week.

Investigators were concerned that if they didn’t assert control over the release of the Tsarnaevs’ photos, their manhunt would become a chaotic free-for-all, with news media cars and helicopters, as well as online vigilante detectives, competing with police in the chase to find the suspects. By stressing that all information had to flow to 911 and official investigators, the FBI hoped to cut off that freelance sleuthing and attend to public safety even as they searched for the brothers.

But even that didn’t stop the online sleuthers. Missing Brown University student Sunil Tripathi was quickly mislabeled as “Suspect #2” after the official FBI photos were release, but before the ensuing shootout and dragnet for the actual suspects.

These revelations provide a startling look at how the first nationwide manhunt in the social media age went down. But it’s not likely to be any less chaotic the next time this sort of tragedy occurs. Many Reddit users were quick to defend their ultimately pointless work in a sign that this could all happen again sometime.

Others, like Tom_Z, deflected their role in the hysteria by pointing out the same mistakes made by others.

“Well, to be fair, The New York Post also plastered their faces all over the front page of their paper…,” he wrote.