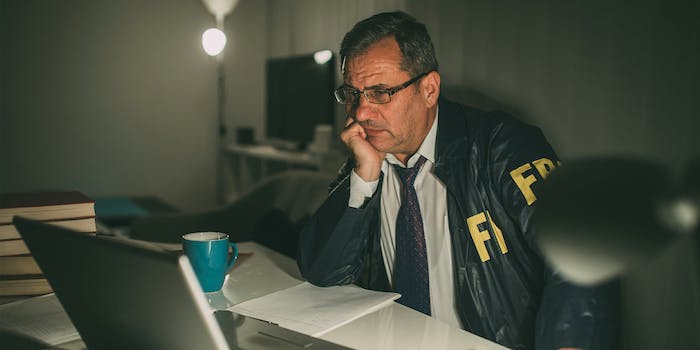 The ‘FBI agent watching me’ meme is about accepting mass surveillance

Do we actually like the idea of being watched?

Is a government agent watching what you do on your internet-connected devices? It’s a fear that has led Americans to take several precautions, like covering up a laptop’s webcam and using encrypted chat apps like Signal. And, because we need a dose of humor to cope with the fact that our online activities are not entirely secure, this fear has manifested itself in a meme.

The FBI Agent Watching Me meme references a government employee, often an FBI agent, who watches our lives unfold like a reality TV show. In the context of the meme, the agent judges us—or cheers us on—while we take selfies and text crushes. The meme appeared last year, and people are still actively using it in 2018.

A tweet by user @INDIEWASHERE about a government agent monitoring her love life through text messages was seemingly the first popular iteration of this meme:

me: *gets left on read by boy i like again*
government agent who's reading all my texts: wow when will she finally find love?? *sighs*

Another popular tweet, from December 2017, uses a clip of Britney Spears to imagine what government agents see in a webcam (if you have it uncovered):

Although fear of government surveillance isn’t new—see Nineteen Eighty-Four—the FBI Agent Watching Me meme is rooted in one of the biggest news stories of the last decade. In 2013, Edward Snowden “leaked” parts of an information cache he’d obtained from his job as a contracted government surveillance employee. The revelations in the documents that Snowden gave to news outlets—that a secret court, loosely governed, supervised the collection of loads and loads of information about private citizens that it mined from our devices—were met at first with derision (there’s no way that’s going on, we don’t even have the technology!) which progressed to denial from the head of National Intelligence, James Clapper (seriously, that’s illegal, we are not spying on citizens) to a dull sort of acceptance (even if we were doing that, it’s for your own good).

In the nearly five years since Snowden leaked those documents, Americans have accepted the fact that someone could be watching our online activities. But in the meme, the FBI agent (or NSA, or CIA, or simply “government employee,” depending on which iteration of the meme you encounter) isn’t a creepy voyeur. Instead, the agent is a kind, parental-type figure. He may be scrolling through our newsfeeds or watching us through our webcams, but because we are aware of his presence, he’s not exactly uninvited.

My FBI agent watching me stream the SZA album twice daily for the past 9 months. pic.twitter.com/JRvMY4IWb8

the fbi agent watching me through my screen approved these pic.twitter.com/msp9rpJp2O

Some memes are simply created to make us laugh, but this one represents discomfort in the zeitgeist. It’s an exercise in mental gymnastics because there is nothing warm or miscalculated in the truth. The reasons a government operative would be mining the data off of our smartphones may be dark and foreboding, indicative of an all-knowing dystopian surveillance state that we are already living inside.

We aren’t going to give up the technologies that make our lives easier—even if that means sacrificing our privacy. But we can reimagine privacy as something we don’t want or don’t need; an outdated mode of thinking more than a self-determined asset. To acclimate to the realities of data collection, we have relegated those that do the collection to the role of helpful, humorous onlooker; every one of our lives a potential Truman Show unfolding in real time. Like many of the best memes, the foundation of the joke works so well because it isn’t really a joke, but a macabre acceptance of the hazards of how we choose to live.

Viewed through the quiet, unfiltered lenses of our devices, we hope that we come across as pitiable. We come to our devices in need of utility, companionship, information, and physical reassurance. It’s comforting to imagine that perhaps Big Brother isn’t just watching us, but watching out for us. There’s also a vain satisfaction in imagining ourselves being watched for entertainment.

The FBI Agent Watching Me meme could provide an opportunity to talk about technocracy, ethics, and what we owe to each other. Or we can just keep throwing our cute selfies up on Twitter and joke about the personally-assigned government agent who we think is watching us.

And if my FBI agent is reading this: I’m definitely not three drinks in during the middle of a workday.