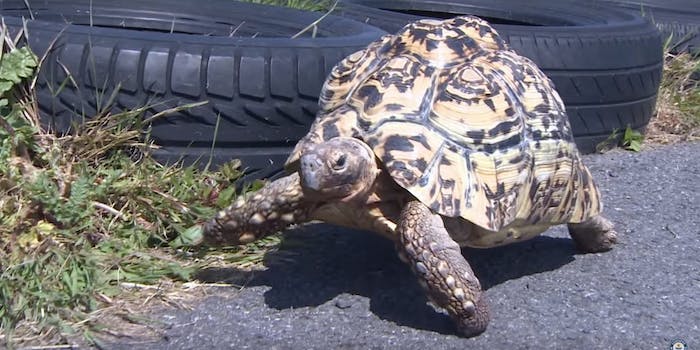 The hare has nothing on this dude.

Growing up, my tortoise Speedy would often break free from our backyard. He’d make it down the cul-de-sac until my mom chased after and scooped him up (or a kind neighbor who knew we had a tortoise with a knack for escaping did the same). But as quick a fellow as Speedy was, he has nothing on the Guinness World Record holder for World’s Fastest Tortoise, Bertie.

Clocking in at an average speed of 0.92 feet per second, Bertie completed an 18-foot race course in 19.59 seconds. Just look at him move!

Bertie lives in Durham, England, at the Adventure Valley fun park. He likes to eat strawberries and has a girlfriend named Shelly (also a tortoise, if that wasn’t clear). Catch up with Bertie’s rise to fame and how he nailed the title as World’s Fastest Tortoise with this video from Guinness World Records:

OK, sure, Bertie is fast, but can he open doors?