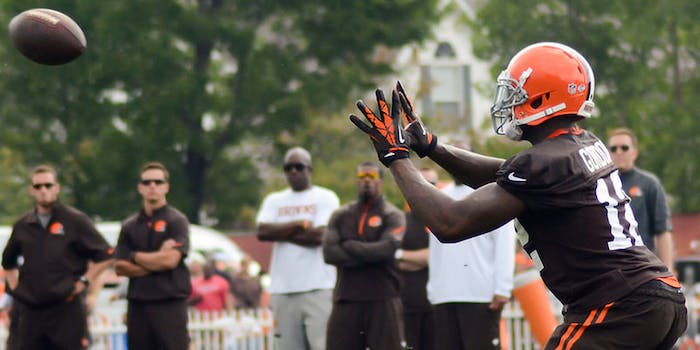 Which is worse—drug use or domestic violence?

The NFL’s season-long suspension of Cleveland Browns wide receiver Josh Gordon for failing another drug test was upheld after a lengthy appeal process. (The league also kept him out of two games last year for violating its substance-abuse policy.)

Punishing a player for smoking marijuana, as Gordon apparently did, might’ve been enough to set fans off, but most were most appalled by a telling comparison: Baltimore Ravens running back Ray Rice was suspended for just two games after beating his fiancée unconscious in an Atlantic City casino. Both were booked on simple assault charges.

Observers tackled the news with gusto.

According to the NFL suspensions for Josh Gordon and Ray Rice, Half Baked is a more disturbing movie than Last House on the Left.

Man, it’s a good thing Ray Rice didn’t smoke weed before he beat up his fiancee in that elevator. #JoshGordon

Josh Gordon could have knocked out Ray Rice’s wife 8 times and gotten the same suspension he did for being in the vicinity of marijuana.

Looks like Josh Gordon should have just punched that weed and dragged it caveman-style thru a lobby. THEN HE CUD SUIT UP.

Josh Gordon smoked weed and got the same suspension that Donte Stallworth got when Stallworth drove drunk and killed a guy. Let it sink in.

the demon bud once again claims another victim. PS I can name four starting QBs off the top of my head who I believe are rapists

@david_j_roth next thing you’ll tell me is that a team is named after a racist slur!

Some people, of course, were invested in Gordon’s case for selfish reasons.

Prayers that someone gets drunk enough to draft Josh Gordon in my fantasy league this year.

Josh Gordon and Sam Bradford are the reason your fantasy league should wait until the week before the opener to draft.

Put Josh Gordon as your starting WR in fantasy if you really thuggin.

People who drafted Josh Gordon in the last round of their football pools will start crowdfunding money for his legal action.

On the plus side, Gordon now has plenty of free time to prepare for his DWI hearing.