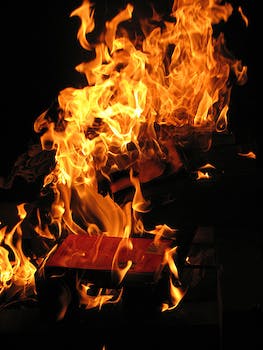 Fake campaigns shock users into real action—but at what cost?

Some well-meaning companies are creating Internet hoaxes to inspire controversy, awareness, and action—a tactic that may hurt their reputation in the long run.

Last summer, the public library in Troy, Mich. was in danger of being shut down. It eventually came down to a vote to either set up a 0.7 percent tax hike for the town or to close the library.

Citizens were furious. Outraged voters showed up to the polls to make their opposition to book-burning known. The tax hike passed by a landslide.

It was only after the campaign had made national news, however, that the Book Burning Party was revealed to be an advertising hoax by Leo Burnett Detroit. The campaign even won an award.

People can do a lot of good when they’re adequately enraged. That’s why some well-meaning companies create campaigns simply to light the fuse.

But even for the most charitable cause, nobody likes being misled. The campaign in Troy worked, but local librarian Phillip Kwik, for one, resented its hyperbolic approach.

“You did nothing to help support the Troy Public Library on August 2,” he wrote. “All you did was add more divisiveness and bickering in a community that should be united on its love and need for a library.”

Clearly, movements are willing to withstand the wrath of citizens like Kwik. On the Internet, where it’s faster and easier to share viral news than it is to check it for accuracy, outrage campaigns continue to grow in popularity.

Just last week, an unbelievable social campaign popped up on a site that claimed to be owned by Shell Oil Co. “Let’s Go!” was purportedly a campaign to inspire Shell fans to come up with slogans about the positives of drilling for oil in the arctic. Not surprisingly, it was soon hijacked by environmentally minded users who created ads to make Shell look bad.

That was exactly what the campaign’s real creators, Greenpeace and the Yes Men, intended. Participants may have felt clever using Shell’s own interface to deride it, but they were less than pleased to learn that they were the ones being manipulated.

“As much as I want this to be real, apparently this might be a greenpeace hoax,” TJBeck commented on an article about the site. “Something tells me Shell wouldn’t have included the Titanic in the stock images. F U greenpeace, I’m going to go kill a whale.”

Last year, Coal Cares, a site which purported to be run by Peabody Energy, offered free Justin Bieber-themed inhalers to kids made asthmatic by coal power plants, infuriating environmental activists. The site turned out to be a hoax from the previously unknown activist group Coal Kills Kids in collaboration with the Yes Men.

The Yes Men have been helping companies create viral hoaxes since 2009. So why, three years later, are we still falling for them?

Cara Friedman, the president at Likeable Community College, believes we can blame it on our misdirected trust for our social contacts. The Yes Men and other hoaxers design their spoofs to go viral. Most people don’t hear about these outrages from faceless corporations, like Shell or Peabody Electric, but through their Facebook friends or duped news sites they trust. And according to Nielsen, there’s nobody we trust more than our friends.

“When you see these things shared on social media, you forget to think critically because you trust your friends,” she said.

“If you saw it on a tabloid, you’d know to take it with a grain of salt. But you’re not expecting fake info on social media because why would your friends lie to you?”

Friedman, who preaches authenticity and transparency to the brand managers she trains at Likeable, thinks the viral success organizations like Greenpeace get for their movements will be short-lived.

“Greenpeace will definitely be hurt by this. If this is a hoax, who knows what else is going to be  hoax? Greenpeace is a reference in the industry, and now you’re going to have to question whether their next message is true or false or what.”

“It’s one thing if you’re making sure everyone knows it’s a spoof,” she continued. “@BPGlobalPR made it clear it was a spoof account and it wasn’t BP tweeting those things. Being deceitful on social media is another thing entirely. How will fans feel when they find out it’s all a big joke?”

People don’t like being tricked, but Friedman says these hoaxes will likely continue to happen.

“As long as campaigns keep meeting their goals at the end, companies are going to still do stuff like this. And as long as we keep seeing outrageous stories from our friends, we’ll probably keep sharing them. I think you just have to be more skeptical of things online. Even if it’s coming from friends, don’t throw away your reporting instincts. If it doesn’t sound right, it’s probably not right.”

Eventually, Friedman predicts these campaigns are going to experience backlash for losing trust.

“It’s great that these campaigns are successful,” she said, “but that success comes at a cost.”