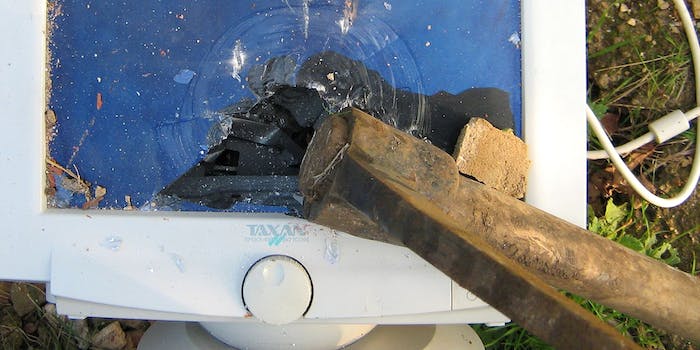 Facebook deleted a page advocating rape, but only because the owner’s name was fake

The page encouraged its audience to “help support the cause in weeding out and eliminating this worthless breed of cowardice we have in our modern society.”

Facebook took down a page advocating the rape and murder of military troops on Tuesday, but the social media company didn’t do it because of the page’s content. Instead, the page was terminated because its owner was registered to the site using a fake name.

The page in question, “Soldiers deserve to be raped and murdered,” came to the attention of Facebook administrators after BBC Technology Correspondent Rory Cellan-Jones tried contacting the page’s owner and learned it was connected to a fake name. He then brought the matter to Facebook’s attention.

The page had existed since last July and encouraged its audience to “help support the cause in weeding out and eliminating this worthless breed of cowardice we have in our modern society.” The website’s language alone, however, was not provoking enough for Facebook to take action since it did not did not pose an immediate threat to a specific person.

“Sometimes there is content on Facebook that expresses angry and unpleasant ideas but does not directly target anyone,” a Facebook spokesperson told BBC. “On investigating this particular page administrator, we found they were using a fake account and we removed it.”

Facebook’s Terms of Service dictate that it can shut down a site if a user gives false personal information. It also has the right to shut down sites that contain hateful speech or if there’s a perceived threat of physical harm.

In 2012, Azhar Ahmed of England was sentenced to 240 hours of community service and fined £300 after posting offensive comments about soldiers. He wrote the comments in March 2012 following the deadliest attack on British troops in Afghanistan in over a decade. The court determined the comments, made in response to “tributes and messages of sympathy,” were written in the height of a serious matter and were a failure to live up to the responsibility that comes with having free speech rights.

Ahmed’s case, however, was determined by a British court and did not require Facebook to step in, as Ahmed deleted his comments soon after receiving negative backlash.

Other pages defaming the military exist on Facebook, as well as pages supporting the eradication of those sites. But as long as the pages adhere to the Terms of Service, it seems unlikely that Facebook will do anything to regulate them.

“Clearly this page was taken down because it was offensive, but it’s very convenient for the firm to have alternative justification,” Dr. Joss Wright, a research fellow at the Oxford Internet Institute, told BBC.

The issue here is largely the arbitrary guidelines Facebook seems to have regarding what is taken down (and why) and what stays. Facebook drew criticism in 2012 after it took down photos and suspended pages containing the photos of mothers breastfeeding, deeming the content inappropriate. Advocates were quick to fight back, and Facebook changed their tune and their Terms, saying the photos were allowed as long as they do not show a fully exposed breast.

While Facebook’s Terms of Service establish the ground rules for what is appropriate to post, its latest action against the anti-military page shows that its regulation seems to be left up to the discretion of the company, especially when it comes to sensitive matters.