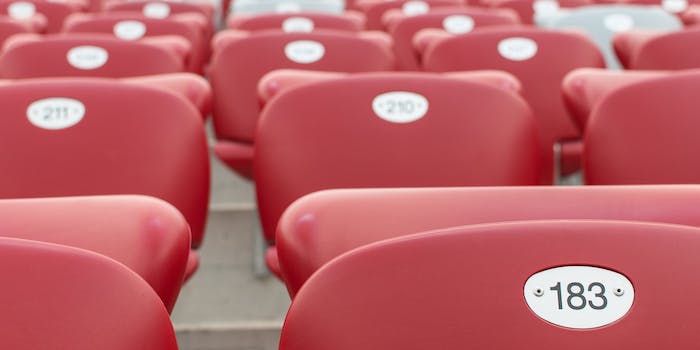 The flawed ‘power’ of sports apps

Michael Jordan had a pretty successful career before apps had even been invented.

Facebook Sports Stadium is the latest attempt in the ever-evolving and expanding mobile, digital sports and entertainment environment, and whenever one of these new products is released the repeated pitch is that it now gives more power to the fans. Yet, this argument always falls flat for me because my supposed power as a sports fan is grounded in the greater accessibility for me as a consumer to easily and efficiently digest whatever information my favorite sports team wants to feed me. How this increased consumption makes me more powerful I’m not sure, but people sure like trying to convince me that I’m more powerful.

In a recent article for Adweek, Alex Beckman, the founder and CEO of GameOn, a sports social media app, wrote an op-ed explaining how Facebook Sport Stadium, gives more “power” to the fans.

“While there may only be one Serena Williams or LeBron James per generation, superstar athletes wouldn’t be worth one red cent to all the brands, sponsors, and broadcasters without—the fans,” said Beckman.

Michael Jordan had a pretty successful career, and made mountains of money before phones with downloadable apps and video streaming had even been invented.

“You’re the fan, remember? That means you’re more valuable than ever,” he continues. “As the world of sports turns, two things are certain. One, more companies will enter the space. Two, they will be falling over each other for your attention…and downloads.”

Based on Beckman’s own assertions, and the fact that he owns a mobile sports app that is a direct competitor to Facebook Sports Stadium and Twitter Moments, we must concede that he most definitely is correct when he says that, “more companies will enter the space” and that, “they will be falling over each other for your attention…and downloads.”

But let’s not get it twisted and revel in delusional thoughts, Serena Williams, LeBron James, Steph Curry and many other athletes would still be worth plenty of red cents if people do not download an app to watch sports on their phones. Michael Jordan had a pretty successful career, and made mountains of money before phones with downloadable apps and video streaming had even been invented.

As an avid, nearly obsessive sports fan I’m well aware of the notion that an athletic team would probably cease to exist without its fans. Before sponsorships, endorsements, and television deals the financial bedrock of all athletic teams were ticket sales, concessions, merchandise and other physical (non-digital) interactions a fan was able to have with the team they loved. And with the fewer revenue streams the “power” of the fans was incredibly high, but the salaries of athletes and other sports professionals were minuscule by today’s standards.

As these revenue streams such as sponsorships, and endorsements that are indirectly, instead of directly, related to fan involvement increased, the power of the everyday fan who buys a ticket, a jersey, and popcorn naturally decreased. This is not necessarily a bad development because when the power of these fans decreased the power of the fan who never makes it to matches and only watches their team on television increased. There are a lot more fans who cannot make it to games for various reasons then there are season ticket holders.

As fans, we received increased access to watch the team we love, and sports teams opened themselves up to increased revenue streams. Sports teams and the entities associated with them made more money, and as a sports fan or consumer, I now have more things I could spend my money one. I may be able to more easily watch and enjoy my team, but I most certainly am not more “powerful.”

The advent of Twitter Moments, Facebook Sports Stadium, and other social media, digital sports applications only further dilutes the individual power of each sports fan. The power of these applications comes from the gigantic user base of Twitter and Facebook. The revenue potential is gigantic because there are so many people within their network or ecosystem that could possibly use the product. And to get users to decide to ignore the numerous other social, mobile options, one of the tried and true methods has always been telling people how powerful or special they have become because they now use one product over another.

The advent of Twitter Moments, Facebook Sports Stadium, and other social media, digital sports applications only further dilutes the individual power of each sports fan.

People like to hear about how powerful they are, but the increased accessibility of sports programming certainly does not make each individual sports fan more powerful. Yes, if commercial and digital expansion efforts now provide someone with access or “power” that they never had before then they now might be a more “powerful” consumer because they were unable to consume sports information before, but by expanding access to the same sporting events each fan individually has less influence. And it is hard to say if the increased fan pool now collectively has more influence apart from making athletes richer and the business of sports more lucrative.

This does not mean that people should ignore these sports social media applications. It just means that we should not need to feel more powerful because we might want to check sports scores while we walk down the street, or look at some highlight videos while we wait in line.

Not a day goes by when I do not find out something about my favorite sports team from my computer or my phone, and it has been years since I have missed watching an Arsenal football match. NBC’s purchase of the rights to broadcast the English Premier League has been amazing for me as a sports fan. I still remember when I was a kid of staying up past midnight to watch English Premier League highlights once a week, and now I can watch matches on my phone and computer almost whenever I want. The sports programming improvements that have happened in the last handful of years have been truly remarkable, and no one should argue that, but we should not care about how powerful they allegedly make us.

As a sports fan, I am just a guy who has a passionate, long-term commitment to the emotional rollercoaster that comes with sports fandom. I appreciate the joy and agony of the spectacle, and I try to stay connected to this passion via my television, computer, phone, chatting with friends and strangers at bars, playing sports, and countless other activities. My power as a fan comes with my ability to connect with this passion via the means that are available to me. Enjoying sports is not primarily about acquiring more power and moving up the sports fandom ladder, as if it is your job. Sports for most people will remain a passionate hobby where gauging your power plays a minute role.

The idea that I need to buy or use a product to be a better or more powerful sports fan has never resonated with me. And most of the time people are usually delivering this sales pitch for something that I do not even need. Facebook Sports Stadium and Twitter Moments both allow you to watch video, checkout scores, and immerse yourself into your sports environment. As a sports fan we now have countless ways to enjoy the spectacle. Does this make us more powerful? No. Do we need to be more powerful to enjoy a sport? No.