We'll all live on as digital ghosts. In a nitty-gritty sense it sounds awful, but in the long term, I think that it sounds a bit wonderful.

I’m starting to wonder, however, if it’s even possible for there to be nothing left of us when we die. For example, I’m still Facebook friends with multiple ghosts. Once in a while, underneath the caption “People You Might Know,” Facebook will rotate in a picture of a woman from my town who passed away a few years ago. She is no longer with us, but her smiling profile picture is still there, cycling in and out amongst images of my living friends. Yes, I do know her. But she’s no longer around to accept my friend request.

Another friend of ours we discovered had died suddenly in a car accident when a mutual friend posted a status update thanking everyone for their condolences with the words, “I can’t believe he’s gone.” Gradually photographs were posted, notes from his sister were shared on his wall, and people were encouraged to tag him so that we could all share in our memories of him via social media. His own account quickly transitioned from snarky remarks about soccer to a memorial page, where people gathered to remember him. Still, even now, every once in a while, a mutual friend will tag him in a picture of a place where they once shared lunch, and his name will loop across my screen as “was tagged.” 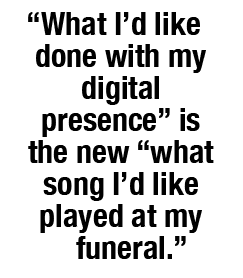 It’s as if he’d passed through the room with a hush—a memory dropped by someone else in my path reminding me that he was once here.

We like to think we will live on in people’s memories, in their stories of us that they tell to others. Some of us will live on through our families. Some of us are lucky or good enough to have done something that warranted a plaque or have our names etched in the history books. But for the rest of us, immortality is this: We are scattered digital footprints, spinning around in a server overseas, waiting for the right keyword to bring our image onto the screen for someone else to see and say, “Oh yes, I remember.”

So: what happens to us on the Internet when we die?

Over dinner the other night, my husband and I discussed what we’d like done with our digital presences when we die. I told him right away that I wanted my Facebook profile deleted. “But the other stuff: my writing, my photographs, even my Twitter account: keep those,” I said over chicken curry.

“You want me to pay however much a year to keep your blog going until I die?”

“No, but I’m sure you can find something that will let you preserve it somewhere for free. That must exist by then.”

“Great,” he said. “Homework. And a funeral to plan, too.” It does sound like a lot of work. But it was important to discuss these things. “What I’d like done with my digital presence” is the new “what song I’d like played at my funeral.”

Programs do exist that let you pass on control of your Internet presence to entrusted loved ones (programs such as Legacy Locker). There are also programs that let you delete your entire Web presence when you fail to check in to tell them you’re alive, and there are even programs that let you send social media messages 50 years in advance. (Though how anyone knows which social media outlets will be around 50 years from now is beyond me. Friendster didn’t see it coming, that’s for sure. Now multiply that by five.)

Then there are realities of digital immortality that we’ve only begun to conceive. A few months back, Dmitry Itskov starting showing up in the news promising immortality through his Avatar Program, in which he intends to upload the human brain into an android body, an Avatar, to live on when the body dies. Others have promised the same for years, from cryogenics onward. Computers will let us live when our body will not.

But what, exactly, is it that we want to live on? And what on earth are we doing on the Internet to ensure that what does live on is exactly what we want?

Every time we post something on the Internet, we post a projection of our corporeal selves that we hope will somehow go beyond us. In a very basic sense, it’s our own form of astral projection, but a temporary one: casting our shadow onto the wall with the misguided sense that it has been etched there permanently, even though it’s nothing more than a shadow.

Where it is burned is not in fact on the wall, but within the cave of our hard drives.

My aunt, a library systems analyst, tells me that she worries about my digital footprint, much in the way you might tell someone you’re worried about their hoarding. I’m a photographer, and for a while, before I started using film again, digital photographs burdened multiple hard drives of space. Not just the photographs that were worth printing, but the outtakes as well, the ones I couldn’t bear to part with, or simply the ones that I couldn’t be bothered to spend the time selecting for deletion. Recently, I decided to clean out some old folders on the computer and found file after file of embarrassing starter sentences for short stories and essays from more than a decade ago—megabyte upon megabyte of what was essentially scrap paper, doodles. 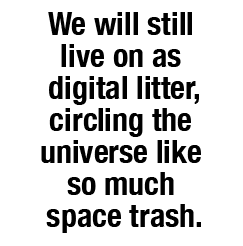 We are taking up more digital space than we need to, and while even our digital material won’t last forever, some of it will certainly outlive us. And, as hard as we try to curate our online presences with carefully constructed About Pages and well-chosen avatars (in this sense, avatar meaning the profile picture, not the Russian vessel for future brain downloads, though is there really a difference?), what will outlive us will most certainly be the stuff we least expected to: the doodles, the scrap paper. The Tumblr post about a song we liked for a moment, just long enough to immortalize it in a post. The outtakes and the misprints. A scathing review we once wrote of a book on Amazon.

This is how most of us will likely live on after we die. Even if we instruct a company to erase our online presence, even if we pass on careful instructions to our spouses to delete our Facebook accounts when we leave the earth, there will be scraps of us left. We will still live on as digital litter, circling the universe like so much space trash.

We’ll all live on as digital ghosts. In a nitty-gritty sense it sounds awful, but in the long term, I think that it sounds a bit wonderful: What seems like nothing now will be the something that lives on. It will be accidental and without our consent. Best of all, it may reappear when we are no longer there, discovered by a random server, in the dark, a shadow cast momentarily on a wall. I think that sounds like enough.