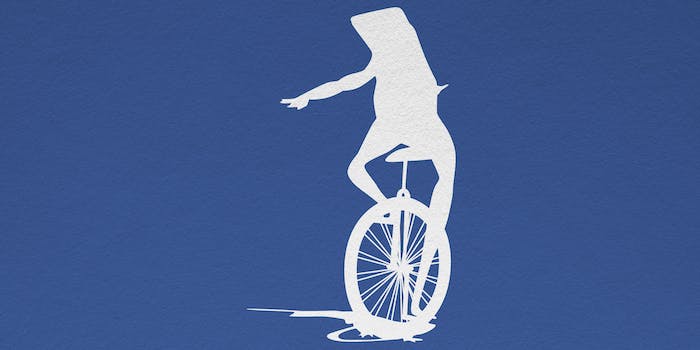 How memes conquered our hearts and news feeds

Memes reassure us that everything will be OK.

When I wake up in the morning, the first thing I do is reach for my phone (surprise, surprise). For years, it had always been the same kinds of notifications, usually texts from my mom nagging me to call her, work emails from my boss, event reminders from my calendar, and funny Snapchats from my friends. But for the past year, I’ve been getting a new kind of notification—“X mentioned you in a comment,” otherwise known as a comment tag on a meme.

Because I live in California and the majority of my friends live on the East Coast, by the time I’ve woken up, they’ve already tagged me in a few memes. Throughout the day, I can expect to get tagged in some more, and of course, I tag my friends back as well. I find myself inadvertently smiling during a coffee break when I get tagged in a clever iteration of the Evil Kermit Meme or between meetings when I find a new Biden meme.

Photo via Imgur and Know Your Meme

You’ve also probably noticed the same. Facebook’s News Feed has become more of a Meme Feed. People post fewer statuses and photos but tag their friends in and share more and more memes. Gone are the days when our News Feeds were full of hundred-photo vacation albums or ordinary text statuses that were neither witty, controversial, nor emoji-less. Facebook has entered the Age of the Meme.

How did we get here? How did memes take over Facebook? Well, maybe it was inevitable that memes would conquer our News Feeds. After all, they had already been normalizing for years on other smaller social media platforms such as Twitter, Vine, and Reddit. But given its massive size, Facebook always was and is a different ball game that requires more time. We see this common-sense rule in other industries as well. For example, quinoa is everywhere nowadays, but quinoa first became widely popular at hipster farmers markets and then at Trader Joe’s and Whole Foods until Walmart finally picked it up.

Since then, we’ve been perpetuating this meme era on Facebook because they are just so incredibly easy to create and share. Meme generators have made it simple enough for anyone to create their own memes, and to share a preexisting Facebook meme, you just click the share button and it’s done. You don’t need to think of a funny caption like you do for a picture of yourself. You don’t need to add some (seemingly) insightful commentary like you do for a news article. You don’t even need to add a relevant emoji. Sharing a meme is practically the laziest kind of Facebook post because there’s no need to create any kind of original content.

And why we love tagging our friends as comments in meme posts? I think that it’s our passive way of telling our friends that we think about them or that we miss them in a semi-public way. We want other people to see that we share these certain feelings with or about certain friends without drawing the attention of a dedicated post. Even when we tag our friends in a post that roasts them, it’s a semi-public way of showing affection.

But ultimately, I believe that the rise of Facebook memes is more than just the result of a conglomerate of algorithms and social media trends and tendencies. The most viral and successful memes get at something innately human. There’s a reason why stressed-out college students share memes that poke fun at being unprepared for final exams or why new moms tag each other in memes that epitomize the unexpected hardships of parenthood. There’s a reason why “meme” had a massive spike on Google search between Election Day and the day following Election Day. We turn to comedic relief when times get hard, and the comedic relief is even better when we experience it with others. 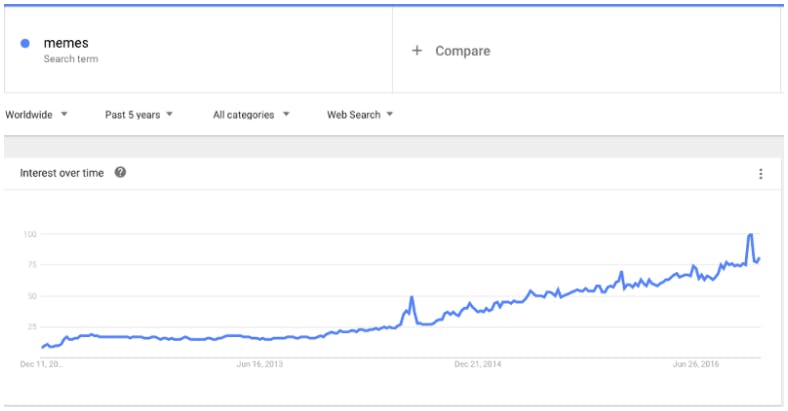 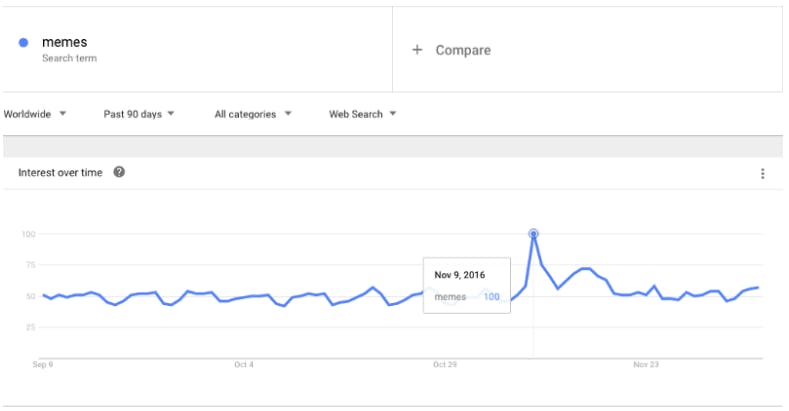 Interest over time for the search term “meme” spiked from 58 to 100 between Election Day (Nov. 8) and the following day

We feel comforted knowing that there are thousands or millions of other people who, like us, identify with a certain goofy image and laugh at it. Memes aren’t quite the escapism that the Great Depression generation got from persistent movie theater attendance, nor are they truly a sense of belonging that the Baby Boomers felt from rock music culture, but I think that memes will be remembered as one of the hallmark cultural peculiarities that played a similar comforting role for our current era. 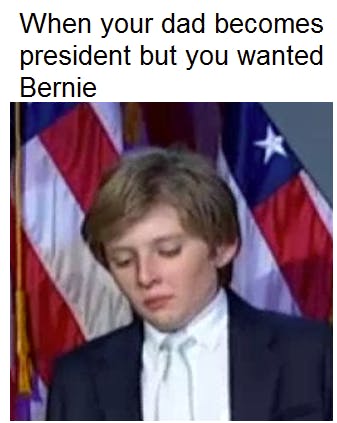 Memes reassure us that everything will be OK. That we’re never alone, that we share common struggles and joys, that we’re all a part of something. It doesn’t matter if you’re a fireman or a financier, Floridian or Finnish, 15 or 50—we can all laugh at the same meme of a fluffy Corgi puppy tumbling down the stairs. This is the beauty of Facebook memes.

In an era when we all seem so divided, we’re reminded that we’re still connected somehow because we laugh together.

For at the end of the day, we’re humans, and humans were made to laugh together for forever. And so we want to laugh, we love to laugh, and we will continue laughing (on Facebook) till the end.

Jaja Liao is a recent graduate of Yale and works in mobile partnerships acquisitions at Google.

Jaja Liao is a recent graduate of Yale and works in mobile partnerships acquisitions at Google.