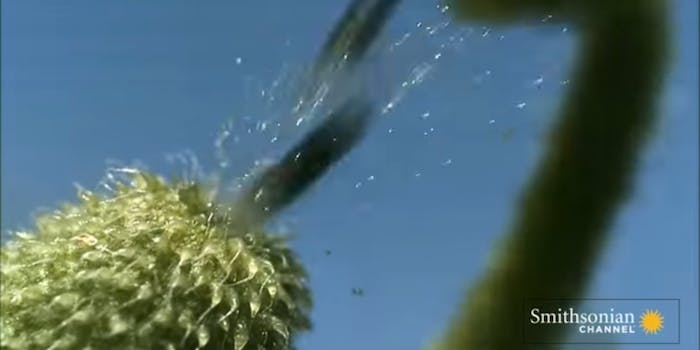 This footage of exploding plants is astonishing and kinda hot

All we need now is someone to set this to 'Baby Got Back.'

The Smithsonian recently posted a YouTube video of “exploding plants.” The video shows high-speed footage of some species of plants that spread their seeds by way of an explosive decompression after keeping the seeds under high pressure.

Plants have many ways to, erm, spread their seeds. Since plants are fixed to the ground, they rely on several methods to get their progeny out to a place where they may have a chance to get enough sunlight and nutrients to grow and thrive on their own. Developing in a place far away from their parent plant will also hopefully give them a chance to get closer to unrelated plants so they can essentially avoid plant incest.

Though explosive seed dispersal is one, rather theatrical, way to do it many plants rely on bugs, birds, and the wind to carry their seeds far and wide.