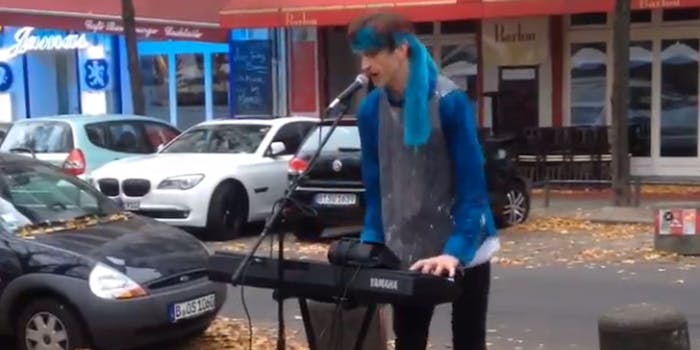 Who is this guy?

I do not know the Shmoney Dance. I can’t do the Raven. I couldn’t begin to imitate the Sia video shot-for-shot, like this fantasy football bro did. I can, however, throw my leg back and forth like Stephen Paul Taylor, the Berlin-based synth-pop artist behind the 15-second performance known to the Internet as “Everybody Knows Shit Fuck.”

Taylor stands in the street, surrounded by cars and leaves, wearing metallic clothing and what looks like athletic pants around his head. He rocks out on his keyboard, yawping curses into his mic. Hipsters these days, right?

The actual song isn’t quite as nonsensical and nihilistic as the video makes it seem. It’s an anti-government anthem called “Shit’s Fucked.” The line Taylor’s repeating here is “Everybody knows shit’s fucked.” The song’s about a system that’s “creating another Pearl Harbor / killing its own kind” and some other wildly profane activities.

As the clip went viral on Reddit, the remixes poured in. Here’s a GIF you can use for a wide variety of things. Maybe after you stub your toe, or your browser crashes and you lose the story you’ve been working on.

And here is an “enhanced” electronica version of the clip.

It’s surprisingly catchy after the third or fourth repeat.