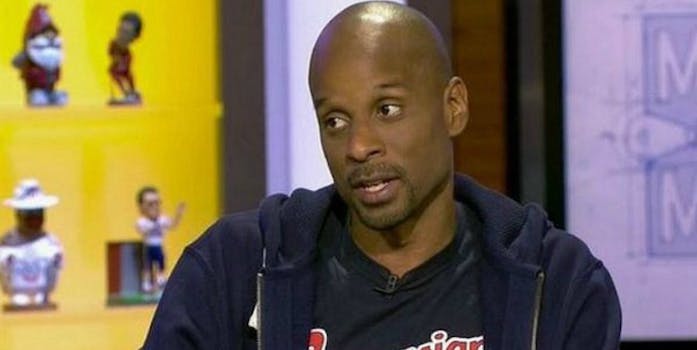 ESPN commentator Bomani Jones went on the TV show Mike & Mike Thursday morning, and before he hit the airwaves, he dropped a clue about what kind of day it was going to be.

A fun day? For Jones, who was replacing co-star Mike Golic for the show, it certainly was. Because this is what he wore.

That Caucasians T-shirt—part of a whole line of merch that so many people are now trying to buy that the retailer’s site appears to have crashed—is a takeoff of the Cleveland Indians mascot, Chief Wahoo, who is normally portrayed like this. It’s a controversial image of a Native American that is clearly offensive to a large segment of the population, but there is no traction for the MLB franchise to rid itself of the longtime mascot.

That appears to be the motivation for Jones to wear the Caucasians T-shirt with a dollar sign (instead of a feather) atop the white man’s head.

TMZ, meanwhile, reported that ESPN asked Jones to cover his shirt during the broadcast.

Jones told the Daily Dot he couldn’t comment, though he later tweeted this.

ppl emailing asking me for comment: my bosses asked that i reply to said requests with this. https://t.co/82zPoorcUx

ESPN told The Big Lead, “As the show progressed, we felt Bomani made his point and had openly discussed why he was wearing the shirt, and we wanted to keep the focus to the topics of the day.”

While Jones partially zipped up his sweatshirt, Twitter users certainly took notice. Jones had no problems engaging with online protesters.

look it up, slugger https://t.co/uIl7Aue7pJ

pass me a cup for all these salty tears. https://t.co/hkiH03lhbq

Bomani's ability to produce White tears without consequence is really the stuff dreams are made of.

Overall, though, everything seemed OK (fun, even) by Jones’ standards.

btw, my mentions aren't so bad. check the totality and proportions of responses before going for the easy blog post.