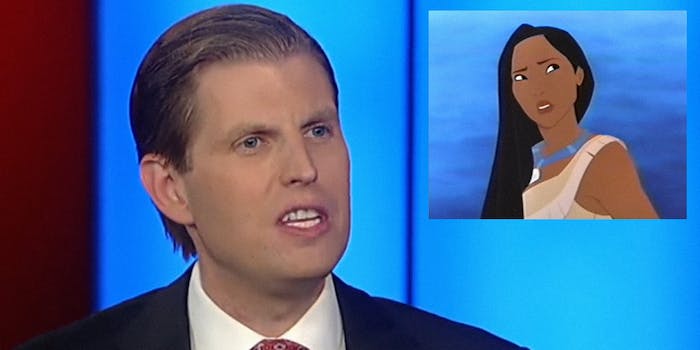 Disney has nothing to do with it.

Eric Trump, son of President Donald Trump, is being torn to shreds on Twitter for an ignorant (maybe willfully ignorant) defense of his father’s use of “Pocahontas” as a derogatory term for Senator Elizabeth Warren. His argument? Disney did it first. Seriously.

The irony of an ABC reporter (whose parent company Disney has profited nearly half a billion dollars on the movie “Pocahontas”) inferring that the name is “offensive” is truly staggering to me.

Donald Trump first used the insult during his 2016 campaign to attack Warren for claiming Native American ancestry, but this time he trotted it out at a White House event honoring Navajo code talkers.

“We have a representative in Congress who they say was here a long time ago. They call her ‘Pocahontas,'” Trump quipped.

Native Americans understandably took offense to the use of “Pocahontas” as an insult. Navajo Nation President Russell Begaye, told CNN he thought it rose to the level of a racial slur.

“Pocahontas is a real person. It’s not a caricature, it’s not someone that’s just made up. This is a person, a young lady, a Native American woman that played a critical role in the life of this nation, and to use that person in that way is unnecessary and it’s being culturally insensitive,” he said.

Eric Trump’s bad tweet assumes that people are arguing the name “Pocahontas,” not the demeaning context in which his father used it, is offensive. And if that’s true, isn’t Disney just as culpable?

It’s not true, though. Although there are plenty of things to criticize about Disney’s portrayal of Pocahontas, the company didn’t use her name as a pejorative. “Pocahontas” wasn’t even a nasty nickname for Warren until Donald Trump made it one. The “irony” Eric perceives here simply doesn’t exist, and he seems to be grasping at straws to extend the narrative that the President is an innocent victim of the mainstream media.

Is Eric Trump ignorant, just tweeting in bad faith, or both? Doesn’t really matter, because he’s getting “ratio’d”—Twitter slang for a tweet with a high ratio of angry comments to retweets and likes—either way. A few hours after posting, he’s got 11,000 comments, and most of them are negative.

The name itself isn't offensive, but his use of it in a derogatory manner is extremely so. The fact that you and your father seem oblivious to the racism that he lives out and spews on a daily basis is "truly staggering" (and shocking!!!) to me. #DeleteYourAccount #NotMyPresident

I’m just here for the ratio

I'm just here to contribute to the ratio.