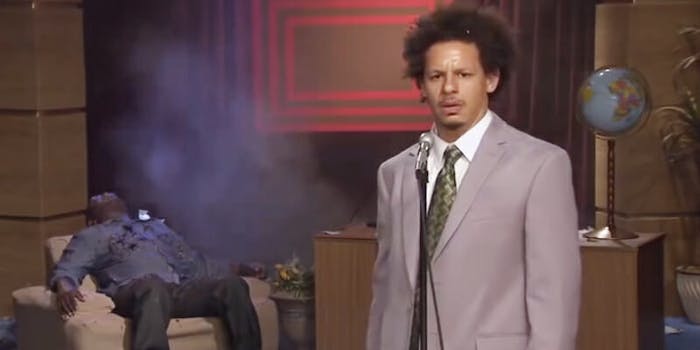 We did it! Good job, internet.

Last month, we told you about a meme that uses a clip from a 2013 episode of The Eric Andre Show.

In the clip, below, Andre starts off by discussing climate change and then pivots and says, “Speaking of climate change, when is Hannibal Buress going to start thinking about some underwear change?” He then pulls a gun out of his suit jacket, fires at Buress, reloads the clip, fires again, before turning back to the camera and asking, “Who killed Hannibal?”

It’s possible that Andre’s intention was to roast climate change deniers. Or not—who really knows when it comes to the absurdist comedian. The meme quickly became used as a way to shame hypocrites and ignoramuses, with popular targets ranging from baby boomers to Trump to requisite Game of Thrones jokes.

Recently, the Eric Andre gunshot meme was announced as the Meme of April 2018 on Reddit’s r/DankMemes. The subreddit commemorated the momentous occasion with the following meme calling out websites with a poor user experience due to being inundated with ads.

"Gunshots" is the April 2018 Meme Of The Month! from dankmemes

The Meme of the Month is voted on by members of the subreddit. Sometimes, an underdog meme like “Google Wants to Know Your Location” wins. The Eric Andre meme definitely wasn’t an underdog meme—it was shared widely across Reddit and Twitter during the month of April. But the two-panel format inspired a lot of smart jokes on niche topics. It’s a great choice.