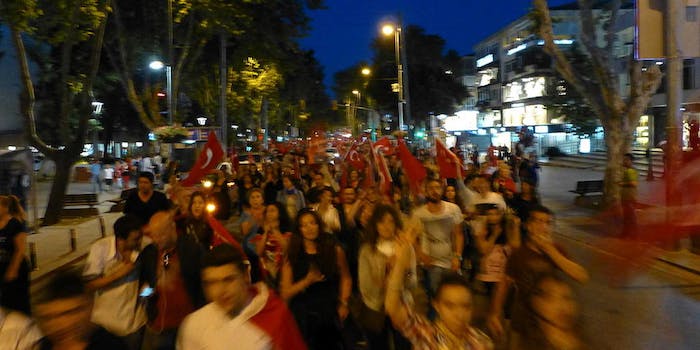 Turkish government agrees to referendum on fate of Gezi Park

Turkey's Prime Minister conceded Friday that he would offer a referendum vote on whether to demolish the park at the center of nationwide protests.

It took several dead, documented police brutality in a number of cities, and a full-page ad in the New York Times, but activists in Turkey will at least get a chance to vote on preserving Gezi Park, the Times of India has reported.

The protests, which started May 28, clearly took Prime Minister Recep Tayyip Erdoğan’s government by surprise. Initially focused on protecting Istanbul’s Taksim Gezi Park from being bulldozed to make room for a shopping mall, they spiraled into a 90-city uprising of a very angry citizenship.

Perhaps no protest in history at that scale has relied so heavily on social media. The protests were almost entirely ignored in local media, meaning Turks communicated with each other, and the world, through YouTube, Reddit, and Tumblr.

It was Twitter, however, that seemed to threaten the establishment the most. At least 29 protestors were arrested for tweeting “propaganda,” and Turkey’s ruling party had been looking for ways to censor Twitter entirely.

Erdoğan finally conceded Friday that he would offer a referendum vote on whether to move forward with plans to demolish the park, which at least should delay activity on it for several months.

“You have stayed here as long as you could and have relayed your message,” he announced, according to the Independent. “If your message is about Gezi Park, it has been received and evaluated,” Mr Erdogan said. “Please now leave Gezi Park and go to your homes.”

“We consider the government’s ending of threats and opening of a discussion on a ‘referendum’ as a step and a promise that there won’t be new casualties. But we unfortunately note that in the prime minister’s or spokesperson’s statements, the threatening language is still present,” the Taksim Solidarity Platform said in a statement.